Sam Savage is an Author Worth Knowing Better

Sam Savage is the author of the novels Glass, The Cry of the Sloth, Firmin and The Way of the Dog.
Savage was born in South Carolina, studied at Yale and now lives in Madison, Wisconsin. His books are published by Coffee House Press, a small publisher-and a fine one-based in Minneapolis. The quality of Savage's work makes a strong case for a boutique publisher like Coffee House.

Savage's novels are tragicomic, funny, outrageous, unlikely, fantastic (as in fantasy) and eminently readable.The title character in Firmin iis a rat who finds himself captive in a Boston bookstore about to be town down. Paper is edible to a rat, so we know he won't starve. What we didn't know was Firmin would become wonderfully self-educated, and if you ate James Joyce, Austen and Dostoevsky all day, you'd be pretty smart, too. 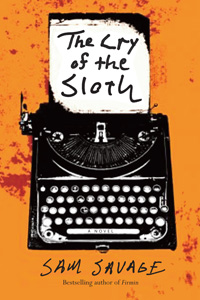 The Cry of the Sloth and The Way of the Dog both concern reclusive old men who are railing against something. Andrew Whittaker is a failed novelist living amongst the debris of failed novels and rejection slips, who lives to write letters to real and imaginary enemies. In Way of the Dog, Harold Nivenson is an art collector and minor artist jealous of those who went before him, and engaging in some neighborhood voyeurism.

I spoke with Mr. Savage from his home in Wisconsin.

SS: Dignity? I suppose they do. They have a certain self-regard. I don't know if I'd call it dignity. They're willing to be clowns. Both the rat and the others are willing to become ridiculous.

CP: does Andrew Whittaker in The Cry of the Sloth know he's ridiculous?

SS: I think he does.I think he's performing. You're welcome to your interpretation. I'm always impressed by the many different interpretations readers give my books, and of course you're as good a reader as I am. If you see dignity, then dignity is there.

CP: Where do these ideas come from? What is your process?

SS: They all have a similar process.  I begin with the first line of the book...usually I hear a voice. Not a physical voice, but a manner of talking. And this voice carries a character with it. I listen to that voice. In most of the books, I've known the last line. I don't know anything else but I know the last line. I know the kind of things they're going to say, and then I know where it ends. I have to get from the beginning point to the ending point! I follow the voice. I take a lot of wrong paths. I back up. I waste a lot of paper. I know I should outline and that sort of thing, but I can't. I go ahead and run down blind alleys and back up and go down another one and eventually I do reach that ending.

CP: When you say a voice-do you hear a tone, or an accent, or a type of diction?

SS:  A type of diction. It'd sort of a set of rules of speaking, or things they will  say, or can say. I don't
know what they are going to say but I have a feeling of the box in which it is going to be said. That's what I guess we call character. Everything they say has to be in character. That's completely a gut feeling. I can't tell you what those characters are like. It's not like in creative writing classes where they say, "Give your characters three traits". I think of them as having souls. They speak out of their depths. That's a very vague thing conceptually, but the feeling of it is definitive. I reach a blind alley and say "Whittaker wouldn't say that. It's out of character. Now back up!"

CP: Your characters live amidst hoarding or clutter or clutter. Are they hoarders? Are they trying to hang on to something?

SS: I don't know if I'd call them hoarders. They fortify themselves. They are withdrawing . This clutter around them is not a hoarding of objects, its a building of barriers,

CP: Its a hoarding of themselves, maybe

SS: It's a hoarding of themselves, a withdrawal like the squirrel who gets all these nuts. He gets in there and now he's safe. He has all that stuff around him, and of course they become overwhelmed by this stuff, because often this stuff represents their past lives . They are all overwhelmed by their past.

CP: But a squirrel saves nuts to eat, so he can live. I don't find that your characters have given up. Andrew Whittaker keeps writing letters. He won't stop. That's not somebody whose given up.

SS:  No he has not given up. But he's overwhelmed by his possessions, by his boxes of stuff. He feels burdened by his past. This is also true of Harold Nivenson (in The Way of the Dog) and even of Edna in Glass.  There's too much stuff, and its symbolic of the past.. There's too much life, too much that
has gone before. And they can't get out form under that.Each one tries first to understand what it all meant, but also to achieve a kind of opening with which they can be free. 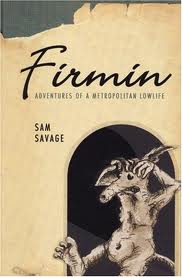 CP: What do you think these gentlemen would have done if they had woken up one morning in a beautiful, clean house?

SS: (laughs) They would have moved into a dingy old hovel!

CP: I'm an a Bostonian and here you are  writing Firmin, set in a Boston bookstore about to be torn down. There's a lot of debris. Discarded books. The one creature who appreciates these books is a rat, named Firmin. Where did this rat come from?

SS: I'm a semi-Bostonian. I lived there for a number of years, and I actually knew the old Scollay Square, where the bookstores were.

SS: There was a famous bookstore back then,the Square was a sailor's hang -out. They'd come over form the Charlestown naval base . Sails in uniform with bell bottom  pants . But there were a lot of used bookstores in the area, too.

I wrote the first couple of pages not knowing he was a rat! I was trying to tell his life and failing, and couldn't right that first sentence, . I wrote these pages and then I went to bed! The next morning I realized the speaker was a rat. It just came to me. It was he perfect metaphor because the rat is the  ultimate outcast. They're member's of our society. They're everywhere. I have one in my back yard now, .Yet they're the most rejected, despised. The rat became a metaphor for exclusion.  He wants to be human and to belong. He wants to be human. The metaphor for humanization is of course, reading. He becomes human, in spite of his person.

CP: The rat starts reading for food and immediately becomes well educated. I was convinced that all of this could happen. I know better. But Firmin is very, very convincing.

SS: That's the wonder of the imagination. All of my books depend a great deal...they leave a lot out, my books. They require a level of engagement. You begin to tell the story yourself. Imagination is important.

CP: Is it fair to say there's  thread of the life of the outcast in your work? 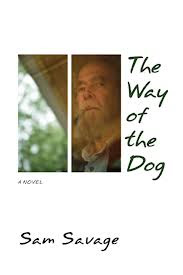 SS: Absolutely. They're all in some place, a house, a bookstore, an apartment. They're all closed up. They're all looking at the past and they're all trying to complete some kind of work. Sometimes the one they want tot complete is the one you're reading. They're trying to complete the same work I'm tying to complete, namely this novel you're now reading. I don't know why I always put them in this isolation. I think in some sense the house is a metaphor for the mind. They are all solipsistic my characters. They want to get out. They want to make contact. Literature is the way out. I  think the book itself, the one you're reading, is their way out of the house. I think that's why this image keeps coming back. I don't seem to ba able to escape from it.

CP: I've read all of your books. They're marvelous reads. They are not depressing ! They are so rich you can read several times..

SS: Thank you so much. I'm glad you are reading them and you value them. Thank you.
Posted by Christopher Purdy at 2:31 PM

Email ThisBlogThis!Share to TwitterShare to FacebookShare to Pinterest
Labels: Christopher Purdy, coffee house press, firmin, sam savage, scollay square, the cry of the sloth, the way of the dog