Columbus Symphony April 22 and 23: A Scandal Concert and Mozart!


The Columbus Symphony 's Vienna Festival continues this weekend with a more than century trajectory of music this weekend. We'll be moving from Mozart's last symphony, not performed in his lifetime, to a synthesis of a Schubert lied which grew into a fantasy for solo piano and was refigured by Franz Liszt, on to what Rossen Milanov refers to the "Mt. Everest of romantic music", Schoenberg's Chamber Symphony 1.

Let's start at the end. Arnold Schoenberg  (1874-1951) produced a concert in Vienna on March 31, 1913, to introduce some of his own music and that of his pupils, Alban Berg and Anton Webern. This was the Vienna where Mahler had recently died, and the Vienna of Sigmund Freud. Thoughts turned inward were finding their way into deeply personal, often highly chromatic music. The older order passeth, the old Emperor, the waltzes, the pretty tunes and pretty sensations became earthy, dangerous and Schoenberg.

Schoenberg had been working in a rich, heavily romantic style, writing music of well cushioned
beauty mixed with eroticism. His expansive lines nevertheless embraced conventional tonality, providing the listener points of rest and direction throughout. This was about to change.

The Kammersymhonie presented by Schoenberg that night in Vienna is scored for fifteen instruments and runs about twenty minutes. There are tunes, there are points of reference. But such points are presented in short bursts, and seldom repeated. Later on Schoenberg was to say that musical motifs/melodic gems/tunes needed to fulfill their function quickly and move on. This deprived the listener of a road map. Listeners willing to explore get carried away by rapidly shifting sounds and themes. They may sound chaotic at first, but begin to make sense as you listen further and expect more:


About that Scandal Concert. The audience rioted on hearing two of the five Altenberg Songs by Alban Berg. Composer Oscar Strauss was sued for slugging a music critic. Said critic went on to write that the punch was "the only good sound in the entire evening".

Franz Schubert (1797-1828) lived half as long as Beethoven and was twice as prolific, maintaining an astonishingly high quality. The Wanderer Fantasy for solo piano, was suggested by Der Wanderer, Schubert's song to a text by Georg Phillip Schmidt. A lot of romantic poetry, reflected in music, has to do with sehnsucht, or yearning. This can be sexual, or it can mean moving toward a goal, an ideal-- and failing to arrive. That which we love and need the most in unattainable. Such seems to be the thought behind Der Wanderer.

The piano fantasy flows from one movement to the next, each "riffing" on a different section of the lied.

The adaptation for piano combines sonata form and sets of variations. The adagio part of the song becomes the adagio movement of the piano fantasy. The finale is such a killer that Schubert himself couldn't play it. "It's the devil's own music" he said.

Franz Liszt (1811-1876), classical music's first mega-star who wasn't a castrato singer, adapted the Wanderer Fantasy for piano and orchestra in 1851. Liszt was an old hand at putting his own spin on other composer's music, while not neglecting his own. Rossini, Schubert and later Verdi were favorite subjects. I doubt any of these composers would have minded. They would have appreciated Liszt's ear and his skill at the keyboard, along with his notoriety. Getting those tunes out there was good box office.

Will Mozart's music be a relief as it ends this weekend's programming? It fascinating to work backwards, from Freud's Vienna with his seeming chaos nearing war, to Mozart's expert soothing classicism. Never forget that Mozart had no problem considering himself an entertainer. He didn't set out to make grand personal statements in his music. He set out to write the best music, and he did. The Jupiter was Mozart's last Symphony. It was not played in his lifetime. It is the product of the astonishing summer of 1788, where he wrote his final three symphonies in quick succession. Astonishing too is that fact that Mozart, was passe by 1788. His music was no longer in favor. The nobility who supported to him were off fighting wars. Mozart's final three years, which saw two more operas among several magnificent works, were lonely, difficult and poor. Yet hear what he accomplished in that summer. Even Woody Allen said in Annie Hall "the slow movement of the Jupiter symphony makes life worth living!

Posted by Christopher Purdy at 10:16 AM No comments:

And Here's to Mahler! 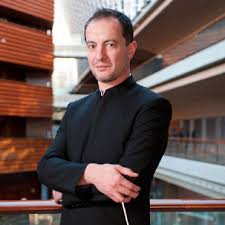 Rossen Milanov conducts the Columbus Symphony this weekend, in Mahler's Symphony 4, Johann Strauss's Fruhlingstimmen and Three Songs for Soprano and Orchestra by Osvaldo Golijov. Dawn Upshaw is the soloist. April 15, and 16 8 p.m. in the Ohio Theater.


Gustav Mahler (180-1911) was a big personality who worked in large forms. During his lifetime he was one of the most celebrated conductors in the world. Before his early death, he had served directorships in Hamburg, and been music director of the Vienna Philharmonic and the Vienna Hofoper, the New York Philharmonic, and with Toscanini was the dominant musical personality at the Metropolitan Opera. Mahler's musical word was law, wherever he worked. Add to this a difficult marriage to Alma Schindler and the death of two young children and its a miracle he lived as long as he did. 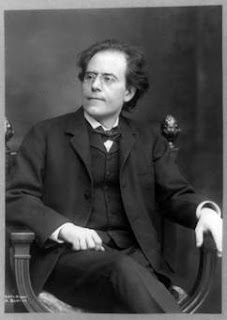 As a composer, Mahler is remembered today for his enormous symphonies and his volumes of songs. There is no chamber music, there are no opera and no sacred music. There are nine numbered symphonies, part of a tenth, and his final work Das Lied von der Erde often classified as another symphony.

What about the Symphony number 4?

It's a curious work. This symphony is the spring time Mahler. He seems less mired in the struggle between life and death, light and dark, breath and no breath . Work began in the summer of 1900. When else was he going to write music? On the train between conducting gigs all over Europe (yes) ? But Mahler counted on idyllic summers in the Austrian Alps for his work. When a local band began practising within earshot, the composer thought he'd have to bid farewell to the Symphony until he could move. One day the band left. Three days later work began and three weeks later the symphony was complete.

Almost. We have a first moment that opens with sleigh bells and offers a soaring early theme for the violins. A second movement he-I imagine gleefully called a dance of death, with he violins a scordatura, tuned higher than the other instruments, giving a rough, almost nasty sound. Then the most sublime adagio. Richard Strauss told Mahler, I could never ave written music like that. Mahler himself imagined "St. Ursula, the most serious of the saints, presiding with a smile."
Mahler's obsession with larger forms brought him literally to the heavens. It was as if he had no other way to out write himself, in the time he he had left.

Mahler intended to end his third symphony with a child's vision of heaven, a poem from the German folk collection, Des Knaben Wunderhorn.

The Third went a different way. But there's a lovely interlude with three angels

But there's a theme here Mahler used again in the Fourth: Du sollst ja nicht weisen/Ach komm und erbarme dich uber mich:  Thou shall not weep/O come and have mercy on me...becomes the refrain in Das himmlische leben:  Saint Peter looks on...The Angels bake bread!....Saint Martha must be the cook!  The angelic voices cheer the senses, so that all awake to joy!

Mahler needed a finale for his fourth symphony. The work began larger, ran into a raucous dance, and settled into that gorgeous adagio. The finish was provided by another setting of the Wunderhorn songs, which he had completed ten years earlier. It is not an anti climax, but a pendant. A child's vision of heaven, Das himmlische Leben, The Heavenly Life

The Fourth became the most accessible of the Mahler symphonies. At just under an hour it is the shortest. It does not predict the end of the world. Instead, after a storm it suggests peace, with a child's smile. 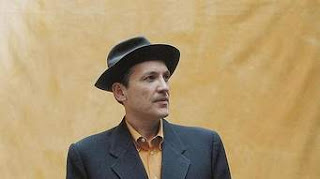 Osvaldo Golijov was born in La Plata, Argentina in 1960. He studied there, and later in Israel an the States. Three Songs for Soprano and Orchestra are part of the composer's output written for soprano Dawn Upshaw. Golijov has a sophisticated background, but his tone it seems to me is more at home with the Wunderhorn songs of the Mahler Fourth than the high drama of the later Mahler Symphonies. Golijov brings to his music the influences of the Far East, French sophistication and downtown grunge. What he also has is a gift for the sublime.  He can create music which is not slow, but timeless, as if time  is  unnecessary, the music filling every need:

Golijov spent a week at OSU a few years ago. He was a charming and modest gentleman and very generous with his time. I found him happier discussing the other people's music than his own. Still, I was about to discover for myself his terrific klezmer themed The Dreams and Prayers of Isaac the Blind, and his oratorio La pasion segun San Marco. The St. Mark Passion was recently heard on Classical 101s Musica Sacra. I was lucky enough to catch a performance of his opera Ainadamar in Boston, another work written for Dawn Upshaw. (Note to composers:If Dawn Upshaw want sing to sing your music, DO NOT SAY NO)

Moon, colorless, like the color of pale gold; though you see me, I'd like you not to see me from the heights; Take me in your rays, silently, to the space where you travel

The other songs in this set are How Slow the Wind to poetry by Emily Dickinson, and the lullaby Night of the Flying Horses, Close Your Eyes by Sally Potter, sung in Yiddish and used in Potter's film The Man who Cried. There's a sense of space, time and culture in all of Golijov's music, along with a healthy entertainment-quotient. He transcends the tango, the downtown grunge, and yiddischkeit.

Posted by Christopher Purdy at 1:58 PM No comments: