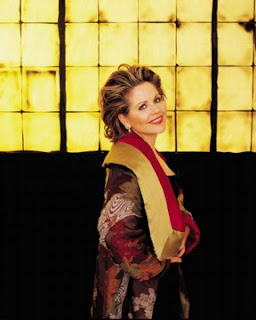 Her bio calls her the "people's prima donna", and Renee Fleming brought her beauty, her fine voice and a sharp and endearing stage manner to Swasey Chapel at Denison University on April 14th. I took bets we'd see a red dress before the end of the evening. She began in elegant black, but after intermission I won my bet, or at least half of it. (Crimson).

The opening Handel arias were skimmed through. They reminded me why I want so much to join the many who worship this artist, but can't quite get there. The diction was mushy, the notes were touched, the line was choppy and the sometimes the cutes took over. But Fleming won my heart with her performances of three songs, written for her, by Henri Dutilleux. (M. Dutilleux is completing a fourth song for this set, Le temps l'horloge-all four will be recorded in Paris next month). This was music that didn't care about intrinsic beauty, and Fleming ran with the opportunities to be dramatic in one phrase and understated in the other. The poets were Jean Tardieu and Robert Desnos, the latter a resistance fighter who died just after the liberation of Auschwitz. His haunting "Le disparu" (here called Dernier poeme) was set by Poulenc. Dutilleux's is a bit more forward, and very compelling. I'll be buying Fleming's soon to be completed recording of these works.

John Kander's Letter From Sullivan Ballou completed the first half; here the diction was spot on, and the over used dreaminess, the opaque quality I find troublesome in Fleming's voice was nowhere to be heard. A friend commented, "She's thrilling when she just opens her mouth and for Christ's sake sings!"

Fleming told us that Richard Strauss was her desert island composer. She performed five of his lieder, including Fruendliche vision, Standchen and Zuiegnung, but she didn't live them. There was never a connect from the lovely woman singing prettily to the guts of each lied. Arias from Manon Lescaut and the redoubtable O mio babbino caro were the evening's first nod to balls to the wall opera. I give Fleming high marks indeed for ending the printed program with a rousing and sexy aria from Zandonai's Conchita. Still, the morbidezza and the trashiness needed to excel in such music just were not there(listen to Maria Caniglia)

The five encores included Summertime, a parody of My Funny Valentine in the style of Beethoven, and I Could Have Danced All Night (with audience participation). The evening ended with an exquisite performance of Strauss's Morgen. Here, we saw and heard the artist. Fleming told us that pianist Hartumt Holl "is an orchestra". Indeed he was. His was the passion sometimes lacking in the singer. No matter. The packed out house cheered and roared and I doubt anyone in the hall had less than a fine time. For all my grouchiness, she's a gorgeous and intriguing artist. But I wish she would just for Christ's sake open her mouth and sing.
Posted by Christopher Purdy at 9:13 AM No comments:

I've been attending the North Columbus Friends Meeting (Quakers)
for the past two years. There's a peace and a camaraderie there I find both comforting and attractive. The task of sitting in silence waiting for the light for an hour each week is enormously difficult. Its a good exercise for me; not to speak but to listen and not to speak unless I feel truly led. I find it very difficult. Spiritual bench pressing of at least 250 lbs, not that I've ever done that1

At a pot luck meeting last night, Quaker worship was discussed. NCFM has what is called an Unprogrammed meeting. You sit in silence. People speak only when they feel compelled to do so. No clergy, no sermon, no prayers, no structure. Its the lack of structure I find exhausting! But it also forces you to make choices, to be a spiritual grown up. You have to take the responsibility to empty yourself out and to really listen, both to others and to what is going on with you. I wasn't raised to be quit and listen for God. I was raised to participate in ritual and embrace dogma, with no thought for questions. This is a new challenge for me. I haven't gotten the hang of it yet, but I'm enjoying the people, the peace and the opportunity.
Posted by Christopher Purdy at 12:04 PM 1 comment: