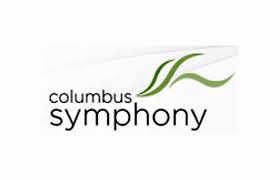 Rossen Milanov conducts The Columbus Symphony this weekend in the Southern Theatre. Ricardo Morales is the soloist for Mozart's Clarinet Concerto, K. 622. Also on the program are Benjamin Britten's Simple symphony, and Beethoven's Symphony 4 in B flat, Op.60 Friday and Saturday 8 pm, November 20, 21.

YOU ALREADY KNOW HOW GLORIOUS THE COLUMBUS SYMPHONY IS SOUNDING AND YOU ALREADY KNOW THAT ROSSEN IS A PHENOMENAL MUSICIAN, BUT IF YOU HAVEN'T YET HEARD RICARDO MORALES GO TO THESE CONCERTS!! AND YES, I KNOW I AM SHOUTING.

We're in the Southern Theatre this weekend for a program of nothing but beautiful music.

What are you talking about? Of course its beautiful music.Last week we had a great ride with film scores by Max Steiner, Maurice Jarre , Bernard Hermann, Elmer Bernstein. The evening culminated in a performance of Prokofiev's cantata Alexander Nevsky, fire and ice and one of the finest performances I have e'er heard in the Ohio Theater, if not any where. And I've been around.

If you want to be comforted and soothed and cuddled (musically) Benjamin Britten's Simple Symphony, Mozart's Clarinet Concerto and Beethoven's 4th Symphony are for you.

First of all, clarinetist Ricard Morales is our soloist this weekend. No kidding, this guy is the real deal. He was practically a kid when named first chair clarinet to the Metropolitan Opera Orchestra. He moved 90 miles south to the same first chair, this with the Philadelphia Orchestra. I've never met him but some facebook correspondence an my inane questions about what the hell is a basset clarinet have been answered with friendliness and humor. You need to hear this guy float a Mozart adagio. Like butta:


Mozart's Clarinet Concerto k. 622 was his final completed orchestral work. Its inspiration was the composer's friendship with fellow Mason Anton Stadler.Biographer Wolfgang Hildesheimer-has descirbed Stadler as a leech and a hanger on. Indeed Mozart loaned Stadler significant amounts of money-. But Stadler's gifts both as a clarinetist and his development of the instrument itself made him a perfect match for Amadeus's sole concerto for the clarinet.  Stadler had worked on La clemenza di Tito, Mozart's 1791 opera for Prague. He had done a great deal to popularize the clarinet and without his concerts and virtuosity we may have waited longer for the instrument to take its important place in the orchestra.

As for beautiful music, what can be more beautiful then the second movement of Mozart's Clarinet concerto. At the time it was written Mozart was still writing exuberant letters to his wife, following the progress of  Tito, and watching his latest-and last opera The Magic Flute attain hit status Vienna. He had two months to live.

Not so cheery are the letters of Beethoven twenty years later! In 1806 he was working on his opera Fidelio.  "This opera business is the most tiresome affair in the world" thundered the composer. Plus ca change.

Later in that year Beethoven wrote the fourth piano concerto, the three quartets Razumovsky, the Fourth Symphony, the Violin Concerto, the Coriolan Overture, the C Major Piano Variations, the Fifth Symphony, the A major Cello Sonata and the Ghost Trio*

The Fourth Symphony has been called Beethoven's Cinderella, or lyrical, calm, lovely, endearing. It doesn't storm the heavens, and might be an emotional antidote to the Eroica. That said it lacks nothing of Beethoven's flair for drama:

The principal key is B flat Major, described by Nicolas Slonimsky in Lectionary of Music as

"...the key of the universe...Most machines of modern industry, electric motors, fans and washing machines-buzz, whir and hum on the 60 cycle B flat, corresponding to the lowest note of the bassoon....and then there is that glorious uninhibited sweep of the clarinet-in b flat of course, that opens Gershwin's Rhapsody in Blue...Can there be a special psychological reason in Mahler's exclusion of B flat...in any of his symphonies...Was he inhibited by its aggressive character?"

The Fourth Symphony was commissioned by the fabulously wealthy Count Franz von Oppersdorf. Beethoven and Oppersdorf had met at the home of Prince Karl Lichnowsky, the composer's patron. The visit did not end well: His worship kept asking the composer to play something and Beethoven kept refusing, finally driven to yell, "There are many princes but only one Beethoven!" before stomping out into the dark and stormy night. Prince Lichnowsky did not hold a grudge. Oppersdorf got his symphony, Beethoven got just  about US$ 10,000 and so we have the Symphony number 4. Lovely and lyrical indeed!


Benjamin Britten (1913-1976) completed his Simple Symphony in 1932, at the age of 19. Already at that young age he had a store house of tunes he recycled into a delicious four movement work for strings. Songs and piano sonatas by the lad Britten were retooled into the 18th century dance movements favored by Bach and Haydn:  A boisterous bouree and the slow sentimental sarabande. But you'll be especially grabbed by the playful pizzicato of the second movement:


*As listed in Jonathan D. Kramer's Listen to the Music, A Self Guided Tour Through the Orchestral Repertoire.
Posted by Christopher Purdy at 10:13 AM No comments:

The Harmony Project on All Sides Weekend

UPDATE: Thank you to David, Michelle, Sandy and Hannah for a great interveiw. The program is archived at wosu.org/allsides

All Sides Weekend is heard Fridays at 11 a.m. on WOSU 89-7 NPR News. The program is archived at wosu.org/allsides and is televised by Ohio News Network.  Book and Arts based programs are hosted by WOSU broadcast manager Christopher Purdy 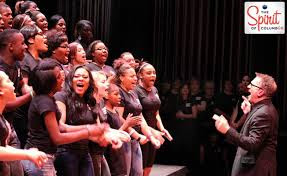 Don't miss Michelle Hermann's essay of Harmony Project, and more in her new collection, Like A Song, published by Outpost 19, San Francisco

I've been a fan of HARMONY PROJECT since my writer-teacher-diva mamaleh Michelle Hermann wrestled me to the ground and insisted I listen to HP sing. I did. Very nice. Then I learned more. Harmony Project's 200 voice choir is an important part of the organization, but not the whole story. Membership requires joyful singing and a commitment to make Columbus better. HP members volunteer in programs citywide benefiting the homeless, the ill, the neglected, the lonely and anyone whose live can be improved with an friendly hand, a smile and music.

In other words, Harmony Project helps people help other people using music as a catalyst.
What's not to love you may ask. Nothing apparently. Just try to get in to one of their concerts or even join the choir. Sold out houses and waiting lists are heartening. So many people want to sing and want to help.

I met David brown for coffee a few years ago. The man burns to make music and connect with others. His need may come from many areas, personal and professional. It's a need that brings talent and energy to many to give to many others. I understood why people will leap tall buildings in a single bound or give up chocolate for this man.

THIS JUST IN: The Arts Innovation Fund of The Columbus Foundation has awarded a Columbus Performing Arts Prize to David Brown, founder and Creative Director of The Harmony Project to support a dynamic multi cultural finale at its performance at the Ohio Theatre on December 1 2015.....
Posted by Christopher Purdy at 2:50 PM 3 comments: 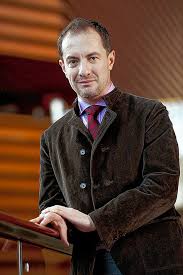 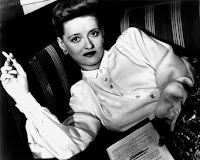