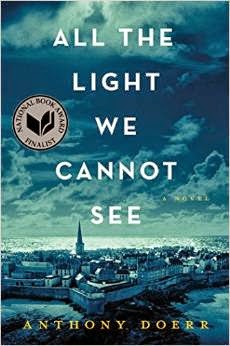 These are the books I read during 2014. I've noticed for myself that no non fiction books have been selected for the top five. There were good bios of David Dinkins, Barbara Stanwyck, The Nixons, and Mussolini! But I'm attracted less to facts and more to exquisite writing, and for that my choices were made.

All the Light we Cannot See examines the connection between a blind girl and a young Nazi soldier in occupied France.

Redeployment  is a collection of stories of soldiering in the Iraq war. You are there and you are horrified and enthralled.

Fourth of July Creek has a very creative premise: a social worker and an abandoned kid in the wild.

Miriam Toews almost made suicide funny. All My Puny Sorrows has a woman emotionally entangled with her suicidal sister. 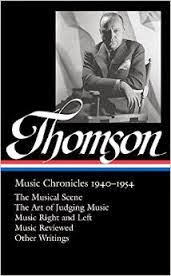 Oh, one more, for me, indispensable:

Virgil Thomson, Music Chronicles 1940-1954
Thomson was a fine composer and is the best writer on music I've encountered.  Funny, dry, nasty, concise and extremely learned.
Thanks to Tim Page for making this available.

THIS IS I SHOW YOU MINE YOU SHOW ME YOURS!

PLEASE NOTE ON THIS BLOG YOUR
OWN FAVORITES AND RECOMMENDATIONS! THANKS!

*The Death of Santini   Pat Conroy

Song of the Spiderman Greg Berg

*The Essay   Robin Yocum
*The Fault in Our Stars John Greene

The Soldier and the Spy (Dreyfus) Richard Harris

Mussolini and the Pope David Kertzer

Pat and Dick (Nixon) Will Swift 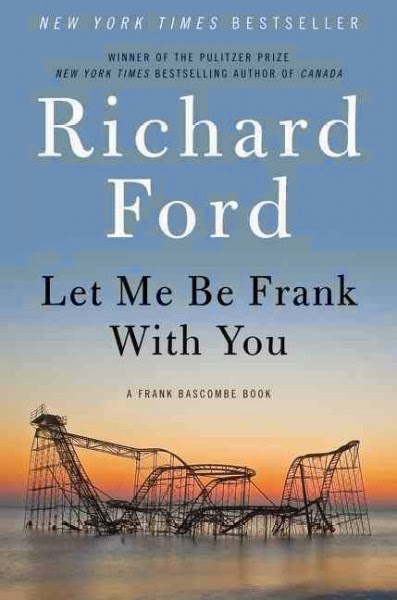 *Across the Bridge Mavis Gallant (stories rec. by Russell Bank)

Sum it Up Pat Summit

Divide: American Injustice in the Era of the Wealth Gap
Matt Taibbi

The Professor and the Housekeeper  Yoko Ogawa

You Should Have Known by Jean Hanff Korelitz

*Famous Writers I have Known Magnuson

I said yes to everything Lee Grant+

To Rise Again at a Decent Hour  Joshua Ferris

Book of Ages: The Life and Opinions of Jane Franklin  Jill Lepore

***Hold the Dark by William Giraldi

*We are not Ourselves  Matthew Thomas
*Nora Webster Colm Toibin

*****All the Light You Cannot See  Anthon Doerr

Without You There is No Us Suki Kim

*All My Puny Sorrows Miriam Toews

Is it a crime to be schizophrenic?

Scott Panetti is scheduled to be executed in Texas tonight for the murder of his in laws. No one doubts that this crime was especially horrendous. Panetti held the older couple hostage along with his own wife and daughter. He shot his in laws to death, claiming the devil had ordered him to do so. He spared his daughter and former wife.

The crime occurred in 1992. Panetti was sentenced to death in 1995. Scott Panetti represented himself at trial. It is said his defense came down to incomprehensible rants. He called over 200 witnesses, among them Jesus Christ and John F. Kennedy. The American Psychiatric Association is among the many signators on letters of clemency directed to Texas Governor Rick Perry.

On Monday the Texas Board of Pardons and Parole denied clemency is a 7-0 vote.

"This is a man who has been severely mentally ill since twelve years before the crime", said Ron Honberg of the National Alliance of the Mentally Ill. "It would be a travesty to proceed with this execution."

Is Panetti a nice guy wrongly convicted? No. He's profoundly ill and and in his madness killed two people. He should not be enjoying the freedoms guaranteed tot he rest of us. He's a danger to himself and others.

What bothers me most, aside from the obvious assault on decency in executing a schizophrenic, as if he should be lamed for his own illness, is the rage that is nurtured in cases like these. Politicians want to be re elected. Thus in many communities they seem to be ignore clemency and decency in favor of death. The public is frightened and outraged by crime. The authorities demonize the mentally ill. They are easy targets and are used to further incite the public. Look what this monster did! Let's kill him! Yes! screams the electorate. There's no gray area, no consideration of brain disorders beyond anyone's control.

Remember, Panetti is not reported to have received medical care in those years prior to the murders. Medication yes. But how diligently was he treated? How extensive was his care? Unless he was independently wealthy, I'll be he got nothing but pills.

Why was Panetti allowed to defend himself? He dressed up in cowboy gear and battle fatigues, and he made absolutely no sense in court. Why was this allowed to continue? Was the prosecution qualified to claim Panetti was acting? He must be a very good and inexhaustible actor.


I worry too that all of the ACLU cries for justice are dismissed as liberal weak assed junk. I'll bet even Sister Helen Prejean is dissed in this manner. What's especially interesting in the Panetti case is the Evangelical community's support of clemency

As reported by Stephanie Mercimer in Mother Jones,


"[Panetti's] religious fervor is the product of a brain disorder, and the evangelicals' opposition to his execution is not related to his religious proclamations," wrote Mencimer. "It is more of a reflection of the shift in public attitudes regarding capital punishment that has been driven by the growing number of exonerations of death row inmates, the high number of mentally ill and disabled people sentenced to die, and the inefficient and expensive administration of capital punishment."

It is becoming too easy and too acceptable to kill people. God help us. They are coming after the profoundly mentally ill. Who's next?
Posted by Christopher Purdy at 10:05 AM No comments: