Giuseppe Verdi was born October 11, 1813. For his bicentennial year, I'm hoping to listen to one Verdi opera per day, in chronological order. I'll leave a few words about each on this blog, along with the recording I used. This is not meant to be musicological document. Just some impressions. I'd welcome your comments.

If you love Verdi, you should know the masterful biography by the late Mary Jane Philips-Matz. 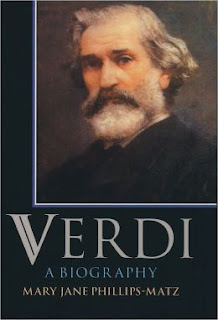 What a pleasure to immerse oneself in this great composer.

Here are the first three:

A mash up of a plot, but an auspicious debut. Bartolomeo Merelli signed the young Verdi to a contract for three operas for La Scala, Milan. Oberto has a respectable success for a first-timer. Already it has some of the drama and the bite that differentiates the early Verdi form Donizetti, tho he as yet lacks Bellini's gift for melody and Rossini's sophistication. Still, this opera deserves an occasional revival. Wonderful tenor role.

A comic opera and a flop. It sounds half-hearted, like a first draft that was never revised. This would be a good doctoral project, fixing it up and producing the opera at the College/Conservatory level. Verdi's wife and two children died of diphtheria while he worked on Un giorno. Verdi couldn't have been in the mood for this bubble of mistaken identity. The opera was finished  to complete a contract. It failed at La Scala and has been seldom revived.

Now we're talking. Impresario Merelli used some tough love on the despairing Verdi. The result was the composer's first bona fide hit. The story of Nebuchadnezzar as told in the Old Testament. Verdi was tempted by the text of a chorus of displaced slaves. Va pensiero is to this day an unofficial national anthem. The vocal writing for Abigaille is deadly: up down, she enters on a low A, she goes up to a b flat. Nearly impossible to sing, the role derailed Giuseppina Strepponi in the first performances. Never mind. Verdi eventually married her. We begin to hear the energy that was the hallmark of Verdi's early operas. Try the Act I finale. Verdi has arrived.

Posted by Christopher Purdy at 10:03 AM