Perfectly Miserable and Whatever Happened to Lexington, Massachusetts?

Many years ago I had an enormous crush on a WASPY girl from Meriam Hill, so when I saw the book Perfectly Miserable, Guilt, God and Real Estate in a Small Town by the similarly named Sarah Payne Stuart,  I was convinced this book was by my long lost  love. It isn't. No doubt my SS left Harvard and is a State Supreme Court Justice someplace warm.

Sarah Payne Stuart is an author whose previous book deconstructed her family, including the celebrated poet Robert Lowell, and his several forays into the nutty bin. The new book is about growing up, returning to and feeling from Concord Ma.
I couldn't put this book down. I'll probably read it again next week. It's that kind of book.

When you convene a bi -weekly book show on radio, publishers will send you their first born. I loved getting this is the mail. I hope to interview SPS for a future show. As long as this post doesn't get her wicked pissed off.

Concord was always a bucolic small town seemingly removed from the suburbia crowding around Rt. 2 West. Sudbury, Boxborough, Maynard and they were fine but Concord was special (Forget Lincoln MA. Nothing there through strict zoning laws but the old and the nouveau. No drug stores of 7-11s in Lincoln) The rich people lived in Concord. The penny candy store was not a faux creation but the real deal and the candy did cost a penny a piece. You could get Thanksgiving dinner at The Inn where real turkeys could be espied in the dining room. The place never saw a can of cranberry sauce. The streets were named Walden and the hospitals named Emerson and the Old North Bridge was a replica, yes-but it was constructed in 1800,  only because the actual bridge had been turned down by retreating Minute-Men (that meant soldiers back then) on April 19 1775.

I was born and raised in neighboring Lexington. We are closer to Boston and the feeling even fifty years ago was a tad more commercial. Concord has for 250 years cherished the adorable myth that the American Revolution began at the leafy North bridge. Everybody knows that the American Revolution actually began several hours earlier on the town green of Lexington. British  troops advancing on Concord were met by a rag tag bunch of guys who had spent the early morning hours mustering in and near the Buckman Tavern.* They were way outnumbered and maybe too stupefied to do anything else but shoot. It was a slaughter and the Brits ran triumphantly forward. I admit there was a real battle in Concord, but that was a continuation. Everyone knows the American Revolution began in Lexington, Massachusetts in the wee hours of April 19 1775.

Our two bedroom cape was closer to Arlington and a hefty  hike away from the Battle Green. Said green is 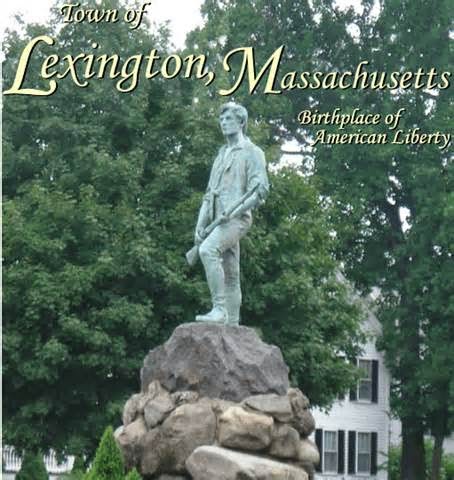 about 2 acres in the middle of Massachusetts Avenue, just past block after block on new brick store front done up to look old. The last time I drove through, about five years ago I thought you could die an old man trying to find a hardware store, but if you're hungry for Japanese cuisine you're all set.

The dry cleaner is hidden back of Mass Ave near the town parking lot, which was FREE in the 1960s. Two pharmacies are now upscale ice creameries ($4 a cone). There are of course Starbucks that continue to plague the land. My idea of tearoom chain meant the Pewter Pot Muffin House, long gone. I think there's a glass figurine shop there now. A muffin you can get along with your croissant and profiteroles up the street. Glass figurines you gotta shop for.

Back to Sarah Payne Stuart. She and I are the same age. She probably went to Concord Carlisle . She and her family-hubby makes documentary films, in that Concord or what?- the people who have PBS tattooed on their bottoms.** Three different houses bought and sold in Concord. The recession has them sliding down their wonderful house on Nashawtuc Hill into another 18th century colonial with an added wing.

I grew up in a 2 bedroom cape. My father was homeless for most of his childhood so to him this was paradise. My mother rolled her eyes, though she loved "my lovely Jewish neighbors."

Don't think it wasn't remarked upon at the Sodality or DAR meetings when a second synagogue opened in Lexington. That JC was Jewish made it okay, even if JC would probably tythe at Temple Emunah , bypassing Sacred Heart Parish. I'm just telling you how it was many years ago; I'm not saying its right (Jeez)


With the plethora of high living occupying Lexington Center today-the packie with the parrot I think adjourned to Bedford St.-its weird reading of buying and selling houses in nearby Concord unless you run a hedge fund. Sarah Payne Stuart makes clear the financial highs and lows. Plenty of lows. Maxed out credit cards, nearby elderly parents and above all the re gentrification of a town and way of life that preferred worn out sneakers and tepid tea to $120 Nikes and that special Chardonnay. It's sad to think that gorgeous old houses, sufficiently ratty after years of living-in, are gutted for glistening McMansions. Same thing seems to be happening in Lexington. That little 2 bedroom cape my father so loved is long gone.  In fairness, its sale financed the Dutch Colonial I call home today in Ohio, for cash-thank you very much. The four room house next door is now a 6800 sq stunner that overflows a small wooded lot. Proportion gives way to money.

Of course these are sour grapes! That's what I can afford, in lieu of the Chardonnay!

*Full disclosure. I was fired from a volunteer job as a tour guide in Lexington for telling tourists the Minute Men were all shit-faced from a night at Buckman Tavern awaiting the crisp and presumably sober Brits. Screw 'em. We won the war, anyway. And I got great tips.

**I work for a PBS affiliate but  that doesn't count!
Posted by Christopher Purdy at 9:35 AM No comments: