If you put a gun to my head and made me choose between the original French language Don Carlos or its several Italian cousins, Don Carlo, I'd probably end up dead. Like many Don Carlo in its five act version is the one I now best. I'm a devotee of the French original (is there an original Don Carlo(s)? Do we know exactly what was performed at the premiere?)

To start with these facts. Don Carlos is a French language opera based on Schiller, composed for the Opera de Paris.  The opera premiered with an elaborate ballet in 1867. The librettists would return to Verdi's life to greater affect in Aida: Joseph Mery and Camille du Locle.

Would you kiss this face? He's not as bad as some. This is King Phillip II of Spain (1527-1598). The King's second marriage, to the French princess Elisabet de Valois (1545-1568). Phillip is at the heart of Don Carlo. So why isn't the opera called Phillip or Phillipp and Elizabeth? Because the King's son, Don Carlos, the Infante of Spain was Elizabeth's first intended, until the King chose the young princess for himself. This example of Oedipal splendor is only one of the strands of Verdi's opera, magnificent in its five act incarnation in French, and bloodcurdling in Italian.

History tells us that the marriage Phillip and Elizabeth was happy, ended by her premature death at the age of 23. We also know that Don Carlos was suffered a devastating head injury in a fall in 1862. The remained of his short life was plagued by violence and delusion. He was nobody's first choice for the altar. He was offered to every available noble lady in Europe, including Mary, Queen of Scots. Nothing doing. Don Carlo was an exact contemporary of his step mother Elizabeth and he died unmarried.

Like most operas based on historical subject, Don Carlos plays with history.  It is a glorious pageant of an opera, in any language. The elegance and danger of the Spanish court is played again the doomed (and fake)
love story of Carol and Elisabeth and Carlos and Rodrigue. The latter is mirrored in Verdi;s relationship with his one time pupil, the conductor Angelo Mariani, passionate without a discernible sexual nature.

The horrid chanting of monks at an auto da fe; the flirtatiousness of the Princess Eboli, Elisabeth's resignation and despair, Don Carlo's passion and madness, Rodrigo's love, Phillipp's loneliness: Verdi has a musical signature for each


Princess Eboli, the King's mistress, in love with Don Carlo

Don Carlo and Elisabeth, alone in their misery:


The love of Carlo and Rodrigo

My problem with this opera is that I can't stop.

Here's the Auto-da-Fe scene in French:

Posted by Christopher Purdy at 2:48 PM No comments: 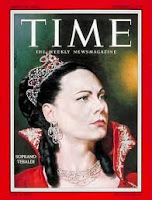 Posted by Christopher Purdy at 9:25 AM No comments: