The large audience in Cincinnati's Music Hall applauded loud and long at the final curtain of Nixon in China at the second of two performances given of this twenty year old opera.
Escorting a bus load of retired professionals, all of whom were better informed of the events leading up to Nixon's 1972 visit to Peking (I was a high school kid and had other things on my mind) this writer was cncerned that mid 1980s minimalism would be hard to take for people more used to La boheme or La traviata. It was a stupid and patronizing assumption. A bus ride pre show talk, my listeners fortified with chardonnay (Big Steve drove the bus and said later, "Jesus, I wold have liked to have seen the show after all the talk about it") was well received, and there was plenty of excited post performance de briefing on the ride home.

There was enormous buzz for this work in the weeks leading up to its world prmeire in Houston, in 1987. The first night audience applauded I believe more out of a sense of being "where it's happening" than fo affection for the work. In 1987, Sellars-Adams-Goodman
WERE "where it's happening" in American opera. Twenty years later it was time to cheer Adams's beautiful music and his witty and moving settings of Goodman's text.

The words seemed an engima to my friends on the bus. I said "That's why the oepra is worth doing and seeing more often." There were direct quotations from the events: Nixon deplanes in Peking and banters gently with Chou en Lai; Mao sings in riddles.
Pat Nixon's role is greatly drawn. This opera tells you more about her than we learned in her many years of public life. Madam Mao has a fiendish dramatic aria in the second act, and returns to seduce her husband in the third. The Nixons are seen as vulnerable and gentle, if shrewd; he a bit goofy, she weary and all knowing with enough fire to protest the action in
The Red Detachment of Women.

All of the performances were splendid. Robert Orth is an extrordinary singing actor with a dark, masculine voice and superb diction. He was totally at ease with his body and moved, sometimes balletically and sometimes clumsily as the situations warranted. Maureen O'Flynn was ravishing in the gentle lyricism of Pat Nixon's aria "This is prophetic!" Mark T. Panuccio will be an important heldentenor in ten years if all goes well. Maos' high and and loud tessitura-Tannhauser, anyone?- was no problem for him. He convincingly played an elderly and frail man without a trace of caricature. It was reproted that young Mr. Panusscio recently dropped over a 100 pounds through diet and excersize, and for this role needed to ear a fat suit!
Thomas Hammons from the orignal cast gave Henry Kssinger the perfect balance of humor and menace. Madame Mao's aria, "I am the wife of Mao Tse Tung!" is a built in show stopper, like "Sempre Libera" or the Queen of the Night. Goergia Jarman certainly stopped the show!

All of the principals excelled in the intropsective third act, the most moving part of the score. Mao and his wife fox trot, and the Nixons do a slow dance. The curtain belongs to Chou-en-lai, sung by baritone Chen-Ye Yuan. What a beautiful voice!

The physical production stumbled only in the use of telelvison sets showing footage of the actual events. They were meaningless to anyone not sitting in the first three rows of Music Hall
(I moved around) Flickers of light distracted the eye from the singing actors. Next time build sets. Speical praise to Henri Vezani's chorus, to the energetic and sexy dancers, and to conductor Kristjan Jarvi and the superb Cincinnati Symphony. It's a daunting challenge to balance Adams's energetc music so that Goodman's text can be clearly heard. Sitting in the first row the ochestra was loud, loud,loud. I moved farther back and the balance was fine. The ensemble wanted little in clarity and precision.

The folks on the bus loved it. Music Hall's large auidence was a good mix of the young and not so young.
Posted by Christopher Purdy at 10:03 AM 1 comment: 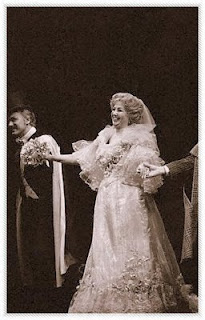 It's hard to describe today, thirty years after her heyday, the intensity of Beverly Sills's fame. She was on every magazine cover: Time, Newsweek, you name it. She had her own TV talk show. She was on every TV variety show, from Carson-which she hosted more than once-to Mike Douglas, Merv Griffin, Dinah Shore. She cooked on TV shows, sang the blues with Ella Fitzgerald, tap danced with Joel Grey and talked about her two disabled chidren while touring chilren's hospital wards and working-a lot-for the March of Dimes. No opera singer had had such profile in this country since Caruso, and he died in 1921. Beverly Sills was marketed as the nice Jewish girl from Brooklyn who made good. But it as a long, hard road. Cirtics this week after her death are respectful but point out one truth: by the time the world knew her, she had been singing professionally for nearly thirty years and her voice was past its best. She didn't have the splendid range of vocal colors that Callas had; she lacked the huge voice and astonishing virtuosity that Suthelrand had but she had it all over those ladies in connecting with the audience. And let me tell you something. This tall, hippy forty plus lady was the most convincing Violetta in La traviata I ever saw. Nothing about her sugested illness or fragility but she made you believe, with her voice and with her body that she was a good time girl meaning to grasp one last romp before she died. As Massenet's Manon you believed she was a sexy fifteen year old girl from the French countryside who was probably caught in the haystacks with a stable boy once too often, who transforms herself into a glittering-and young, and slim, which by then Sills wasn't- courtesan. Everything she did on stage was completely believable. The voice at its best glittered like a shower of diamonds. Nobody sang higher or faster or more scrupulously. At the Boston Opera she would come in twenty minues before curtain, throw her coat at someone hanging around-often me-, say "Thanks, honey", hum a bit, climb into a costume and go out and give the most harrowing, beautifully sung performances of deep, magnificent, tragic operas. In the intermsions she'd send a kid out-sometimes me-to the local MacDonald's for a vanilla shake which she would joyfully toss down before going mad or being beheaded in Act 2. This was a pro.
She had a hard life withal, that a lot of people don't realize. I hope younger peple who didn't know her will check out youtube or go to the library for her recordings and DVDs. And learn to do what she did...give joy by singing with joy.
Posted by Christopher Purdy at 10:50 AM 1 comment: