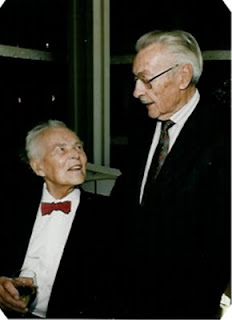 I did the second of my two annual Metropolitan Opera intermission feature gabfests this past weekend. The opera was Wagner's Lohengrin, in a controversial staging by Robert Wilson. There were no sets. The stage cyc was lit blue, white or -very briefly green. There were beams of light at right angles. Stage movements were stylized slo-mo. Costumes were plain, in blues, dark wine red for Ortrud, gray for the men. And I loved every minute of this. I found it very moving, focusing entirely on Wagner's magnificent music, with the light washes and movements filling in just enough to tell the story. I expect this was my last Met broadcast. The management is changing. The production team, my second, that invites me is being replaced. But what a twenty plus year ride I've had! I met great people and I heard performances from the best seats in the house I will never forget, and got lunch, yet! Some of these people made ME seem shy.

I got smashed at an RCA "do" in 1983 held to celebrate the Metropolitan Opera's 100th anniversary. RCA producer Richard Mohr was hovering near the bar. He had hired most of the famous, now elderly (most in heaven today) opera stars in the room. Richard had recently been named Producer of the Metropolitan Opera broadcasts. They had been on air since 1931. He said to me You look like you're under 100, do you want to be on the air? If you can speak I'll take you. At that point I nearly couldn't speak. I was fascinated by a well preserved diva, sixty if she was a day, in a red dress slit up to were you could count her...never mind. Anyway, I said yes and a few weeks later there I was.

The panel on that day (the opera was Tchaikovsky's 'Eugene Onegin') included of George Jellinek, President of WQXR in New York, author, teacher; and Alberta Masiello, a Met pianist and conductor who counted Maria Callas among her pupils.
Then there was me, who sold records at Barnes and Noble. And I went back every year.
My mother in Boston was hysterical. She kept calling my answering machine: "Jesus, Mary and Joseph! I had no idea what the hell you were talking about but it sounded wonderful I just wish those people would stop singing! Your Aunt Mary called me and said for chrissakes my kids barely speak English!" Ma heard one more broadcast and passed away.

Richard Mohr was a curmudgeonly type who liked his gin and tonic and who had spent fifty years as a record producer for RCA and felt that in his old age he could finally say whatever the hell he wanted to about any bloody artist living or dead, and did! I was asked to write an obit for him and the Met broadcast it a few years ago. It's somewhere on this blog. Richard's assistant was the great Miss Vinnie Volpe, a diminutive Italian lady from New Jersey who knew where all the bodies, fictional and real were buried. She weighed ninety pounds and was somewhere between seventy and ninety and feared no one. If you hadn't finished your lunch before the opera began she would wrap the leftovers in the the Met's best linen napkin and you could take your chicken hash right into the the center box, the best seats in the house. People like Leontyne Price, Cesare Valletti, Donald Trump and Rudi Giuliani would sit in those seats, along with Christopher who sold records at Barnes and Noble. God forbid you were in the wrong seats. She told the CEO of Texaco to move and he did. One day a large group of beefy men in Armani had the adjoining box. Miss Volpe said, Oh look there's John Gotti! He smiled and bowed to her.

I cried when Miss Volpe died. She would tell Richard to have me on a lot "because he can't afford good seats and he needs a meal." Nobody, but nobody else in my entire life has ever looked at me and said I needed a meal.

Richard would go on about his departed favorites, whose recordings he had produced: Stokowski, "the best ears in the business, ever".
Toscanini "A pussycat, he never gave me a bit of trouble" unlike that maestro's reputation for a Vesuvian temper. He got a kick out of soprano Zinka Milanov. "Zinka would go into this dive opposite the old Met on thirty ninth street just before a performance and she'd bark "Gimme a sviss cheeeeese on rye vit plenty moooostard!" and then damned if she wouldn't cross the street and sing an Aida to knock you out! "

Richard had flashcards which he waved at us during the-live-in-front-of-a-studio-audience broadcasts. They said, longer, shorter, five minutes, stretch and shut up. Period. You would look at these cards and try not to giggle. Once in a while he'd let me host the panel. His stage whispers on live radio were terrifying. "What an asshole this jerk is" he'd hiss at me between clenched teeth 10 inches from the mikes.

And the guests! I grew up with Miss Masiello, who shed tears on cue at any mention of Callas ("Onassis, he keeel her, he murder her") and who was a chain smoker and would light right up in her wheelchair and cough and growl away. She switched to Nicorette but it was too late and she died. Ma in Boston would complain, why did they let that man talk so much. I still miss Alberta. Father Owen Lee, August Professor of Classics at University of Tornoto was one of my favorites and what a privilege to know him! He'd laugh at my Boston Irish funeral stories
("Grammy was laid out for three days until the bootlegger called and said he couldn't make it! Grampy almost had a stroke") and he would explain Wagner, Nietzsche, Sophocles and basketball in a way that would have you enthralled and begging for more. Albert Innaurato, playwright and commentator shocked audiences by saying "Years ago the nuns in Philly told me, Oh dago boys don't go to college" Edward Downes would be gracious and polite to all and sip his light seven n seven and invited me to his home in the Dakota upstairs from Yoko Ono and dictate his memoirs. They are also on this blog!

Richard died. Vinnie died. Miss Masiello died. Mr. Jellinek retired. Edward died. Later on the broadcasts became more professional, more polished and not quite so warm or exciting. It was run by professionals who treated us all with class and respect. No gossip. No more gin at lunch. Sigh. I was cast as the brat and ran with it. Why not? I had enough good stuff to say that I got away with mistakes, like confusing a canon and a fugue, and this past weekend I went on about American Idol when clearly my co guests had no clue what I was talking about. That's okay. America knew.

If I never go to New York again, I have twenty years of memories of fantastic people
to keep me company. Miss Masiello found Callas in heaven. Edward Downes is talking to Wagner, in perfect German no doubt. Miss Volpe is telling God that her cloud is too damned crowded, and she's crying for joy at the sight of Renata Tebaldi singing in heaven. Richard Mohr is rolling his eyes and holding up his SHUT UP flashcard.

I heard tremendous performances: Leonie Rysanek as the Kostelnicka in Jenufa; Domingo and Voigt in Die Walkure, Pavarotti's final-ill advised-Radames in Aida-Renee Fleming as Violetta and Rodelinda. She made a believer outta me.
War and Peace. Christa Ludwig as Klytamnestra in Elektra, one of her last performances. Thomas Hampson and Susan Graham in Werther; Dimitrova in Turandot-whew! And I will never forget what a compliment from Miss Masiello or a hug from George Jellinek meant to me.

I began attending performances nearly thirty years ago, in standing room. Very top of the house. You could get vertigo but oh my you could hear. Standing room was $2 back in 1979. Today its $20. And last Saturday, after seeing this marvelous Lohengrin from the best seats in the house, seats I could never afford, I came back a few hours later for Tosca, not because I really needed to see Tosca but because I wanted to be closer to heaven to thank a lot of old ghosts, and to say goodbye...from standing room.
Posted by Christopher Purdy at 2:59 PM 2 comments: