Anita Cerquetti, an Introduction and a Rememberance 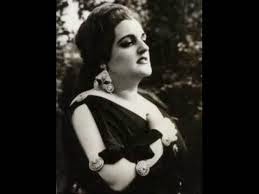 It would have been easy to label this post 'The Forgotten Prima Donna, but the fact is that soprano Anita Cerquetti has long been cherished by opera enthusiasts and record collectors. That says something for Cerquetti's art, since few of us heard her live. The lady retired in 1961 at the age of thirty and never sang in public again.


Anita Cerquetti died last week at her home in Rome, at the age of 83. She had surfaced in a few documentary films in recent years, a cheerful, hefty old lady who spoke intelligently and passionately, not about her career but about music, text, and singing.

Far from being a curiosity, Cerquetti had a fine career for the decade on the 1950s. Her debut at age 20, to her final appearances in 1961 had her singing all over Italy, South America and Europe. In the States she appeared with the Chicago Opera, and I believe there were concerts in New York and Philadelphia. This was a brief career, Euro-based. Of commercial recordings in the age of Tebaldi and Callas, there are only two: La Gioconda with Del Monaco, Simionato and Bastianni, and an aria recital.

The record companies weren't interested. The public was. Cerquetti excelled in the big Verdi girls: Aida, the Leonoras, Abigaille and Elena in I vespri Siciliani. Bellini's Norma was a specialty. Cerquetti it was who replaced Callas when that singer abandoned a run of Normas in Rome in 1958, to international fury  (de Gaulle and the President of Italy were in the audience. It was thought Callas 'walked out', thus insulting the heads of state, when in fact she was ill and simply could not sing)

Cerquetti was a big woman with an expressive face and a large, gleaming voice. There as a certain huskiness to the tone which helped give the voice originality. The tone was even thought the scale. Norma's rage was no problem for Cerquetti, nor was Norma's ecstasy. This was a huge talent with a very brief career. Why?

Cerquetti spent her life explaining her early retirement, and fighting off rumors from cancer to insanity. By 1961 she was tired. In an interview with Lanfranco Rasponi, she stated:

"When my father became hopelessly ill, I cancelled ll my performances so I could be with him, as I loved him with all my heart. After the shock of his death, my beloved  maestro Mario Rossini, to whom I owed everything, passed away. I kept postponing the signing of contracts, then I found myself pregnant. After the birth of my daughter Gioia, once more I could not make up my mind to resume. She needed love, attention and care, and who was going to give it to her with a mother always on the go?"

So she stopped. Raised her daughter and enjoyed her home and family. Interest in her singing never wavered. Cerquetti was always the source of rumor and musical journalists often rang the doorbell. Rasponi, in the aforementioned interview in the elate 1970s tell us, "At first Cerquetti was not eager to see me, but eventually received me in the most cordial manner."

Thanks to recorded broadcasts, we have complete performances of Aida, Norma, Ernani, I vespri Siciliani and Guglielmo Tell.  Cerquetti's singing is all over youtube. Her biggest hit is the aria O re dei cieli from Spontini's Agnese di Hohenstaufen. Get going.

Posted by Christopher Purdy at 8:47 AM No comments:

Today for the first time in years I missed my old life in New York. I romanticize those times, but a lot of it was fun, important and the memories irreplaceable.  My new York was still affordable to students. My New York is long gone. My old haunts, Tower Records among them, the  New York City Opera, Hot Woks Chinese, all long gone. Studio apartments rent for $5,000 a month if you can find them. They are not nice apartments. The working class and the creative class seem unwelcome. It's the very very rich and the very very poor.

I'm just home from seeing Verdi's Macbeth, as presented by the Met this afternoon. I wasn't there in person. I saw it on the big screen, live in HD.  It's a murky production, not much to look at, very dark and unimaginatively staged.

What the afternoon did have is what I remembered from the 1980s: buzz, excitement, blood, frisson. It was important, dramatic music theater and it was all about great voices. Anna Netrebko assigned her sex kitten  with a whip persona to a shattering and  glamorous Lady Macbeth. She sang the fearsome role....with no fear. She had guts and beauty and you could tell from Columbus Ohio that her energy burned through the Met. The  vanilla-ization of opera was no here to be seen today. The baritone Lucic is not much of an actor but oh my he sang. It 's a woody baritone voice, not intrinsically beautiful. But he sang the music beautifully, and like La Anna he sang with guts. Rene Pape, what splendid glamor casting for Banquo. There's a beautiful voice. Likewise Joesph Calleja -he brought line and class to a fine "Ah la paterna mano".

Noah Baetge! Remember that name. He's a big boy who sang Malcolm and will soon graduate to the big boy parts.

HD closeups of the Met chorus show that no one cheats at he acting and involvement, not for one moment. And the Met chorus sounded what like hat they are....the best in the world. Likewise of course the peerless orchestra. Fabio Luisi knows his Verdi ad knows that this is one of the most theatrical of composers. The music making was rich and detailed and flew by.

Why do I rave on so? Again, the buzz was back.  Opera became an Event once more. It wasn't pretty and it wasn't adorable and no one was skinny and it was ferocious and fantastic. The audience was stamping and roaring and screaming. That used to happen all the time in my day, when Sutherland, Price, Pavarotti,  Milnes, Domingo, Siepi were regulars. I was wondering what shows these days I would wait in line for. Well, this Macbeth for beginners.

Am I right? Did the guts come back today? I became very nostalgic for my days in New York (1978-1991)...Yeah it was the grad student cliche. Selling records at Barnes and Noble to keep me in ramen noodles, ketchup, three dollar bottles of wine and standing room tickets ($2).  In those pre-9/11 days you could sneak in sandwiches and beer and we'd picnic on the floor at intermissions. I know most of the ushers from my Opera Quiz days. They left us alone. After the show we'd all repair in the late evening to Tower to look at records (RECORDS) and arrogantly and joyfully rip to shreds what had been a splendid evening. Then you'd pair off if you were lucky or go home for another day if you weren't,

My life today is rich, full, exciting and filled with responsibility for which I am prepared. But it is good to remember an earlier time and to realize that those days gone by are creeping back.
Posted by Christopher Purdy at 5:13 PM 1 comment: