Anyone who listens to Norman sing, or who has read her book, "Stand Up Straight and Sing!", knows she is very aware of the turmoil inherent in any life well lived.
I have never heard her speak so passionately — perhaps controversially — about world affairs. Norman did this interview during the last presidential campaign in the United States. She spoke about American politics, her view of the United States at the time, not performing Wagner in Israel and the worlds' continued bondage to racism.
Whether you agree with these views, this is an antidote to the stereotypical "And then I sang" interview attributed to classical singers.

The retirement of Justice Anthony Kennedy from the Supreme Court is as disconcerting to many of us as is the current Presidency. That the man now in office will have the power to name a Supreme Court justice is alarming.

That news broke the week after I had seen the new film about Justice Ruth Bader Ginsburg, RBG.

"All I ask of our brethren, is that they take their feet off of our necks"


Filmmaker Betsy West discusses her attraction to Justice Ginsburg's career. "In the 1970s, as a young lawyer, Ruth Bader Ginsburg argued cases before the supreme court that changed women's lies for ever."

The charm and the 'adorable' quotient ' of a tiny elderly lady is a small part of the take away. These alone would be patronizing and miss the point. Justice Ginsburg, it seems to me, is a jurist who cannot abide a lack of fairness. Not favor, fairness. What is available to men should be available to women. Careers, advancement, position, if you can work for it you should be able to attain success.

She may be the first woman to articulate this so clearly-and simply-since Joan of Arc.

Posted by Christopher Purdy at 11:28 AM No comments:

EUNICE: The Kennedy who Changed the World by Eileen McNamara. Simon and Schuster

"If that girl had been born with balls, she would have been a helluva politician."
So was quoted Joseph P. Kennedy about his fifth child, Eunice, who was born in 1921.

Eileen McNamara's new biography of Eunice Kennedy Shriver shows that a lack of physical appendices in no way deterred this driven woman from promoting and politicizing not only compassion but tangible, measurable help for those with "special needs."

'Retarded' or Mentally Retarded' are terms used throughout McNamara's book, citing Eunice Kennedy Shriver as a woman of her time. The "mentally retarded" were ignored or warehoused, even if they came from families of means.

Eunice would  know. Her older sister Rosemary Kennedy was the victim of a botched lobotomy in 1941. She lived sixty- five more years in complete custodial care, not visited by her family until Eunice made the trip in 1961. This was after a stoke incapacitated Joseph Kennedy, upon whose orders the family had not visited Rosemary. 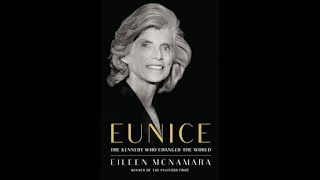 There are threads throughout this book. Eunice's passion and energy seems to have been a product of rage. Rage that she was born female, thus "less than". The opportunities for a political life, a life of decision making, a life as a power broker. It was not the life Joseph Kennedy dictated for his daughters. They were to marry and their families would live to support the political careers of the  Kennedy men. Anything else was nice, okay, but not the point.

Coupled with this was the Rosemary's exile from the family. Specialists at the time dictated the complete separation of the "special" from their families. Why upset the routine?

Joseph Kennedy arranged for Rosemary to live and be cared for at St. Coletta 's School in Wisconsin. She had her own house, and two nuns lived with her full time. That's care few could afford. It also precluded a return to any sort of useful and satisfying life.

Rosemary had more self awareness than was assumed. She new enough to resent this exile. Rosemary's rage became Eunice's.

Eunice Kennedy Shriver turned that rage into a long life of service. The Special Olympics began, literally in her Maryland back yard. The inspiration for the games came from the Chicago Parks  Authority. The games began lakeside, but the public and press swarmed to Maryland. Shriver invented "no child left behind" except she really meant it. Kids and young adults were introduced to competitive sports, each to his/her ability.

The Shriver family made the Special Olympics possible. When Mrs. Shriver wasn't in the pool or throwing a football, she stalked the halls of congress, demanding-and getting-funding. So forceful was she that the political mantra became "Give Eunice what she wants. It's just easier." She was happy to influence or nag her bother, President John F. Kennedy.

Generations benefited from Special Olympics. They still do. Generations continue to benefit by not being locked away. Opportunities were created for people who a few years earlier were warehoused and ignored. Mrs. Shriver saw that happen to her sister Rosemary. Damned if it was going to happen again.

Make no mistake, Mrs. Shriver was no sweet ladylike creature. She was a skinny, intense, hyper bulldozer. Get in her way and get run over.  Help her,  and she'll have a list for you of projects yet to be funded.  She was plagued by health problems, but nothing stopped her.

At her death in 2009 at the age of 88, Eunice Kennedy Shriver left disgruntled employees, several exhausted staffs, politicians who loved her and feared her, and decision makers who had learned to take her calls, pronto.

There was a long and happy marriage to R. Sargent Shriver. He was no slouch himself as a businessman, political candidate, and presidential appointee. Sargent Shriver was the first to lead JFK's Peace Corps,  and was chief cheerleader to the cyclone that was Mrs. Shriver.

Her children continue the work of Special Olympics, Best Buddies and advocacy for any of the less fortunate on their radar, and said radar seems to be ever expanding. At the end of Eunice Kennedy Shriver's life, the "special' had lives far removed from institutions. That is a legacy.