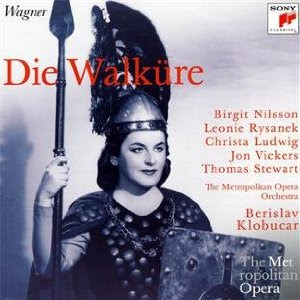 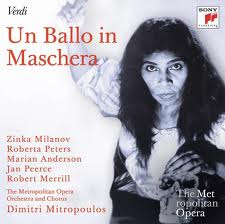 Click on the above and listen to the finale of Pagliacci from the Metropolitan Opera, broadcast live April 11, 1964.
Franco Corelli, Lucine Amara, Anselmo Colzani, Franco Ghitti and Calvin Marsh. Nello Santi conducts

Want more?
You should.

The good news is that SONY Classical has begun releasing Met broadcasts commercially with sound cleaned up a bit. The above Pagliacci is paired with of course Cavalleria rusticana, with Richard Tucker and Eileen Farrell. On my own copy of this broadcast I always found Farrell a wonderful singer but dramatically removed. Either I've changed or the sound has because SONY has our Eileen in great voice and dramatically compelling.

Corelli is back in Don Carlo with Rysanek and Tozzi, and a wonderful Rodrgio from the Romanian baritone Nicolae Herlea. Franco's in Tosca from 1962 with Leontyne Price (was any voice more beautiful?) and Cornell MacNeil, whose Scarpia always scared the ginger outta me. Price and MacNeil are featured as well in Verdi's Ernani from 1962, with my favorite tenor Carlo Bergonzi. This is a great performance of a dumb opera. Once past Price's 1st act aria the score doesn't do much, though MacNeil has Act 3 to himself and he's worth the price of admission and then some. Bergonzi's line and sweetness of tone are marvels. God bless him.
And do yourself a big favor: Il trovatore with Leontyne Price and Franco Corelli, one week past their sensational "double debut" in 1961.

Roberta Peters's commercial recordings of Rigoletto and Nozze di Figaro are hard to find, but here she is live from the stage in broadcasts from 1955 and 1961 with Giorgio Tozzi, Robert Merrill, Richard Tucker, Lucine Amara, Cesare Siepi and Mildred Miller. A lot of this is mouth watering. These were the standard casts back then.

The most famous broadcast in the set thus far is undoubtedly the 1947 Romeo et Juliette with Bidu Sayao and Jussi Bjoerling. I can't imagine these two roles sung more beautifully. It shows why this opera was such a hit in those days.

We hear Birgit Nilsson in Die Walkure with a dream cast of Rysanek, Vickers and George London. The great Swedish soprano and Jon Vickers are also featured in a 1960 Fidelio that will rattle your socks. Richard Tucker is heard as Don Jose in Carmen with Rise Stevens, who owned the role (alive and glamorous today at 99) and especially as Hoffman from 1955, conducted by Pierre Monteux, with Marrtial Singher, Roberta Peters, Lucine Amara and Rise Stevens as the sexy Giulietta.

Ok. You and I both now that anyone who really wanted recordings of Met broadcast going back 70 years could get them. I have a wall filled with nothing but. Legalities and royalties be damned. But for the many, and for the business of opera and recording to have these broadcasts commercially available-and inexpensive, about $15 a pop, is a great treat. Indulge yourself. And phooey on the critics who damned Marian Anderson with faint praise at her 1955 Met debut. She's 58 and not in fresh voice, but she is tremendous in her own way as Ulrica in Un ballo in maschera with Jan Peerce, Robert Merrill and Zinka Milanov.

Start clicking and order it. Order 'em all.
Posted by Christopher Purdy at 11:16 AM