A Lament for the New York City Opera 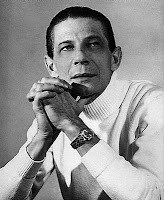 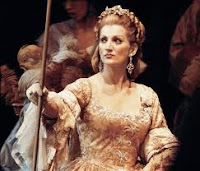 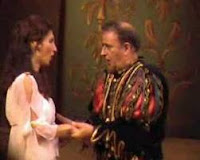 With today's report in the New York Times of a lockout at the New York City Opera, I suspect this wonderful company really has come into its final days. Management squandered hundreds of thousands on a general manager who left before producing one opera for the company; they have left Lincoln Center (it's no longer the New York State Theater but the David I Koch Theater but it's going to be the State Theater to me) and is roaming around sites in Brooklyn the Bronx and Manhattan (who are these people? Cole Porter?) with no permanent home. The chorus and orchestra, back bones of the company-what made the City Opera a company has been decimated. THEY are the ones locked out of rehearsal (I do have to ask locked out from where?) today.

I haven't seen a City Opera performance since Nic Muni's modern dress AIDS ward Traviata in 1990. The show was sold out. People cheered and people booed but everyone in the State Theater (thank you very much) was involved. That to me was the point of the many City Opera performances I did see: even in a theater too large with crummy acoustics, the mission of the artists on stage and the unseen personnel was to communicate-I never saw a City Opera artist walk through a performance. The company meant a great deal to me when I arrived in New York in 1979. I put down my bags and ran to see Faust with Diana Soviero and Samuel Ramey; Tosca with Marilyn Zschau and Brent Ellis, Gianna Rolandi and Barry McCauley in Lucia. I had cheap seats, but they were seats, and cost $2!

I've posted a youtube clip of the Lucia telecast because it represented to me, without Sills, Treigle, Domingo or Ramey, a good night at City Opera- a good night for any opera company-minus the great high voltage stars. This to me was City Opera at its best-back in the day. I admire the stagecraft of Steven Wadsworth, Nic Muni and the Alden brothers-I haven't seen their City Opera productions, but I imagine they didn't look like this Lucia. And that's fine. This was 30+ years ago. City Opera moved with the times. It refreshed the repertoire, brought in -out of the box' production teams and kept its devotion to American singers.

That past? I never heard the great Cosi fan Tutte cast with Phyllis Curtin, John Alexander, John Reardon, Judith Raskin and and Frances Bible. I would have loved to have heard Curtin in Salome andSusannah. Brenda Lewis in Mark Blitzstein's Regina. I was too late-barely, dammit!-for Norman Treigle in anything and I would have loved to have experienced his Olin Blitch or Mefistofele.

Beverly Sills was in Boston a lot-where her Violetta was unforgettable. I was lucky to hear her t at the City Opera, sublime in I Puritani, Anna Bolena, Barber of Seville and Manon. She gave you the reason for all the shouting and press accolades.

To me City Opera was about Tito Capobianco and his stagings-how sad I missed Sills's Lucia and how I loved Rolandi!-I saw Frank Corsaro's Butterfly years after it was new and I still remember Patricia Craig taking the crucifix off the wall after Sharpless read her Pinkerton's
kiss off letter. Patrica Brooks! Who was more beautiful? I did see Patricia Brooks, in Puritani-but I missed her in Corsaro's Traviata. But I did see the staging late in the day with Diana Soviero and Rico Serbo-both of them young and gorgeous making you forget everyone else. Catherine Malfitano and Samuel Ramey made you horny as Susannah and Figaro-and I saw my first Ariadne at City Opera: with Johanna Meier, John Alexander, Patrica Wise and Marilyn Niska....

American opera had a nurturing laboratory at City Center and later at Lincoln Center. The City Opera imprimatur told the world that American opera thrived with by Hoiby, Flloyd, Menotti, Douglas Moore, Robert Ward. So many more. This at a time when Rudolf Bing at the Met said, "We cannot produce American opera because people will not come." Maybe Douglas Ward's Wings of the Dove wasn't a sell out, but the fact that it was produced at all meant that new opera mattered.

I grew up at the City Opera at a time in my life when I needed to grow up. I treasure this great company and its legacy. Nobody who has ever seen a New York City Opera performance would allow its chorus and orchestra to be locked out.


Posted by Christopher Purdy at 1:48 PM