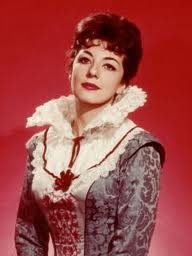 There are two Saturday afternoon broadcasts from the Metropolitan Opera that live on in infamy forty plus years after the facts.

One is the February 1, 1969 performance of Lucia di Lammermoor with Anna Moffo. There was always a lot of hype around Moffo. She as good copy: gorgeous, nice voice, good actress, and a self described jock from Pennsylvania. She went on with no voice and her career never recovered

The second is the January 29, 1966 performance of Mozart's Don Giovanni . I'm listening to it now. The great Cesare Siepi repeats the role he owned. Gorgeous. Geraint Evans is a gruff Leporello, more dangerous than funny. The trouble begins with soprano Teresa Stich Randall as Donna Anna. This lady had a very distinguished career. On this blustery Saturday afternoon the tone is white and pinched and grating. The beloved Jan Peerce is an impeccable artist but he sounds his age-62- as Don Octavio. The tone has gone from dry to brittle.

And then there's Elisabeth Schwarzkopf, the Elvira. She sang this broadcast and left the Met for good the next day. Her voice simply doesn't respond. The timbre is there, and she is warmly applauded, but every note costs her. There is no 'flow' to the tone. She went on for several more years, so if this was just a bad day who can say? But I often find that these gleefully received-by some-disasters have many a fine point as well. Moffo had the stylish Nicolai Gedda and Renato Bruson in his Met debut. Don Giovanni had Siepi, and well, Mozart!
Posted by Christopher Purdy at 2:29 PM