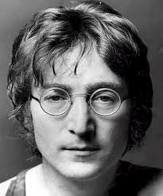 It's been widely discussed that John Lennon would have turned 70 on October 10. Soon we'll be remembering the 30th anniversary of his death. I lived in New York back in 1980 (thirty years ago! MY God!)He was killed late at night. But it was all over the early morning news radio. No internet, no facebook, no cyber stuff then. You had to listen to the radio or watch TV. That morning I set off from E. 78 St. where I was living and took my usual walk to work in the Fisk building at 57th St and 8th Avenue. Believe me, it was easier to walk than to take a convoluted subway route(s) at the height of rush hour. And walking is how you really got to see New York. Especially late at night or early in the morning. I walked across the park at 79th St. and came out at Central Park West to head South. And there as the Dakota at CPW and 72nd St. And there was a huge crowd, standing west as far as you could see...spreading south to Columbus cirlce. It was 7 a.m. and there was not a sound. The crowd stood in silence. People were blocks away form the scene but it was one huge group in silence. Some were crying and some held candles and some had pictures held up but here was not a sound. In the middle of New York City at 7 a.m. on a work day. I had been in new york when Presidents and Popes died, but I never saw a crowd like that, before or since. I stood there too. I don't know for how long.
Posted by Christopher Purdy at 12:19 PM