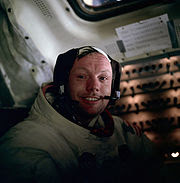 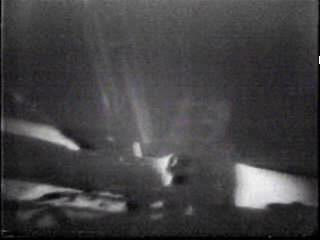 It's forty years since Neil Armstrong walked on the moon. Do people get thrilled any more? By anything? Yes, sports victories are great. I kvell to great music making. It may not be the same music you like but I get the thrill. 9/11 united us all in horror.

But when was the last time when the entire world, or at least all of the US was united, or at least felt untied in a shared 'high'. I can't think of much past July 20, 1969, when Neil Armstrong walked on the moon. It's good to see him,at 80, making the news and talk show rounds. I don't think he had done that before. Neil Armstrong seemed to have been reclusive, and good for him. Maybe he 's a humble man who felt he had a job to do, and did it. But hot dog her was not...in fact none of the Apollo11 astronauts followed up with spousal abuse or drunk driving charges, the kind of shit we worship hearing about on the news today. No disrespect, but non stop coverage of the death of Michael Jackson insults heroes like these astronauts. Just my opinion. If you want to honor Michael Jackson, buy and enjoy his music.

I was 13 years old on July 20, 1969. I was Camp Miramar in Duxbury, MA. We all stayed up late wot watch the moon landing on the one 18" black and white TV. Younger campers fell asleep. I didn't. I'm so glad to have this memory. I wish everyone could, and share in an hones to God thrill. I wish younger people -40 and under!- could summon this memory and remember how amazed we all were that man had landed on the moon.
Posted by Christopher Purdy at 12:05 PM

I think the election this year had people pretty united for the most part, but I agree the moon landing was big. I have pictures of my kids watching it on tv, while my neighbor mowed his lawn! So even then we were not all united. Maybe there are just too many things competing for our time these days.