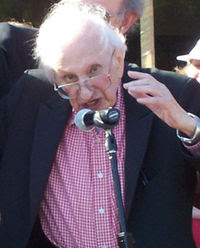 Louis ("Studs") Terkel, broadcaster, oral historian, raconteur and Chicago fixture for over seventy years, died last Friday at the age of 96.
You can learn more about him from www.studsterkel.com.

In 2005 when he was promoting his book "And They All Sang: Adventures of an Eclectic Disc Jockey" I spoke to Studs Terkel. I was promised ten minutes and we went on for over half an hour. He was still quite young then, 93.
Our talk will be a podcast at www.wosu.org shortly.

Meanwhile, here are
some written selections:

"I was an asthmatic little boy, eight years old when I was brought to live in Chicago in 1920. The smell of the stockyards cured my asthma right away."

In our talk, Mr. Terkel goes on to explain the 75 year love affair he had with Chicago. He made me want to move there.

"Every radio soap opera back in those days had three gangsters.
The bright one, the middle one and the dumb one. I was always the dumb one.
And I always died, just before the first commercial break...Later hey wanted us to wear tuxedos for the studio audience. You looked like a gangster going to his sister's wedding. But I became a disc jockey before the term was invented."

"Raisa! How does someone your age know Raisa? You are the first person your age to ask me about Rosa Raisa! What a great, magnificent voice. She was the greatest Norma ever, better than Callas....She loved to sing with Caruso. He invented the gramophone, you know. Any immigrant who could scrape together a quarter could buy a recording of Caruso singing 'Celeste Aida'....

NOTE: Rosa Raisa (1893-1963) born Raissa Burchstein in Poland. Dramatic soprano.
Prima donna of the Chicago Opera, 1915-1940. Puccini wrote the title role in his final opera, Turandot for her. She sang the premiere in Milan in 1926, two years after Puccini died. Although her career was international, Raisa, like Terkel, was a Chicago institution.

People want to know how to survive with dignity...remember I told you there was a machine that saved my life? And there's a machine that can destroy us all. And this is our choice. We live in a world of sanity. There's enough imagination in the human race to create this world that makes me, at ninety-three, live with a new kind of verve..."
Posted by Christopher Purdy at 2:39 PM

As a former resident of NW Indiana and Chicago, when I read Studs' words in your blog, his voice with its distinctive almost raspy timbre and, if I may be so bold, legato phrasing came right back to me across the years. Thanks!