Bill Scharf, one of the great people of life, has sent me a recording of Dichterliebe with the Russian bass Alexander Kipnis. He's accompanied by Wolfgang
Rose, in this broadcast from 1943.


Kipnis has been on my radar without my being deeply familiar with his work.
Where have I been??!
What a magnificent, imposing, rolling, black bass voice this is!
His operatic performances must have been towering.
At first hearing his voice completely overwhelmed me, the sheer sound, the size of the voice. It was like hearing those recordings of the young Callas for the first time, or like watching a wreck. You are fascinated. Can't turn your eyes (ears) away. But for all his huge voice and his fat, juicy sound, Kipnis aims his voice right at the words, dead on , dead center. No slipping and sliding. You don't get seasick from listening to Kipnis, and he nails your ears-and ass!-to the wall. He really enjoys a lot of the words: liebe (love) heilige Strome (holy river) brust/Himmelslust (breast/heaven's joy). He can be huge and menacing in Ich grolle nicht

And sad and natural in

And in the second song he takes a tiny pause 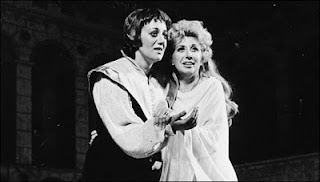 I got a lovely present from a radio listener I don't know...I've been sent a recording of Bellini's opera I CAPULETTI E I MONTECCHI-The Capulets and the Montagues-a performance given in Boston on June 7, 1975. I was in the chorus. Beverly Sills was Giulietta. The late Tatiana Troyanos sang Romeo. She was a highly strung wreck all through rehearsal. Sills was cool and kept saying "Jesus Tatiana! You're the best in the business! Calm down!"
The first two performances were threatened when everyone got sick...Romeo, Juliet, Friar Lawrence and half the chorus. (Most of us were just hung over, in the chorus I mean) By the third night all was well. It's a wonderful souvenir, and very moving for me to hear it again, thirty years later.

I love the finale. Capellio, the father of Giulietta comes upon R & J's bodies and cries out Killed! They are killed! Who has killed them?
And the chorus cries out: Da voi, spietato! Killed by YOU, wretched man!
Jesus, what would Freud or Anne Landers have made of this? Ain't opera grand!?!
Posted by Christopher Purdy at 2:43 PM