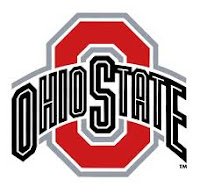 The School of Music at The Ohio State University presents Verdi's FALSTAFF in Mershon Auditorium, Friday May 4 at 8 pm and Sunday May 6 at 3.

The production is staged by A. Scott Parry and conducted by Marshall Haddock. The costumes are by Christine Kearney.
Todd Thomas sings the title role, surrounded by a (wonderful) all student cast.

The Sunday performance is broadcast live on Classical 101.1 FM... on line at www.wosu.org/classical101

Falstaff! The final opera by Giuseppe Verdi. The composer was eighty years old at the opera's premiere at La Scala, Milan in 1893. He may have protested too much, crying "think to my age" when enticed by his librettist Arrigo Boito to end his career with comedy, and one of the composer's greatest loves, Shakespeare.

Verdi and Shakespeare were old friends. Macbeth was his first turn at the Bard, in 1847. The composer considered this opera a favorite child, revising it in 1865. To then end of Verdi's life there were hints at King Lear. In the past ten years scraps by Mozart, Beethoven and Schubert  have been found. Who knows what lie in the attic and cellars at Sant'Agata, Verdi's estate outside Milan?

Otello came forty years after Macbeth. Verdi had settled into a peaceful retirement, so he said. His letters at the time say he was content and finished with the theater. I don't buy it. The composer of Rigoletto, Il trovatore, La Traviata, Don Carlo (written for Paris) La forza del Destino (written for Russia) and even I masnadieri (written for London and Jenny Lind, no less) can't have been happy sitting watching the flowers grow, lovely estate or not.

Verdi and Arrigo Boito had met years before-the esteemed composer, a world celebrity, and an angry young man making his way at the expense his betters. A hot and heavy affair with Eleonora Duse gave Boito some social cachet. Boito's  relationship with Verdi grew into friendship with Otello. Boito's Italian language libretto has been called superior to Shakespeare's play (I ain't goin' there). Verdi's music was sensational. The opening storm choruses hav the audience reaching for rain gear to this day. There is no love duet more deeply moving than that between Otello and Desdemona at the close of Act I. The haunting kiss motive will come back, haunting indeed, at the end of the opera.

"Opera needs laughter as well as tears" Verdi said. His one comedy was his second opera, Un giorno di Regno (King for a Day)  written during a time of deep personal tragedy, nearly fifty years earlier. It seems that killing 'em off was more lucrative.  But there was Verdi, fresh from Otello's triumph, in his cool, dark rooms in Milan-applause ringing in his ears-leafing through Shakespeare. It was Boito who came up with the idea for Falstaff, helping himself to The Merry Wives of Windsor and Henry IV.

When I was a pageboy to the Duke of Norfolk, I was so skinny, (sottile) I would slip through the ring on your finger!'

Here's Monsieur Maurel in 1907, six years after Verdi's death. He sing sit three times, being cheered on-and then once more, in French!

Here's more of that seduction. Silly Sir John has written the identical love letter to two ladies, Mrs. Ford and Mrs.Page.-the better to get more much needed pennies to finance his besotted lifestyle. The ladies get the joke and want revenge. Sir John ends up in a laundry basket thrown into the Thames

These clips are from the Metropolitan. Falstaff was first heard there with Victor Maurel, on February 4, 1895. W .J. Henderson in the New York Times:

Surely none left the auditorium without feeling that they had been in the presence of a masterwork, and one, too, little short of miraculous in its superb vitality, coming as it did, from the pen of a man who had passed the allotted three score and ten.

Falstaff has an adorable if naughty title character, the Merry Wives of Windsor, two young lovers, an angry husband and some creepy hangers-on. There's even kissing behind a screen, and a phony marriage in Windsor great park!

And all ends well. Verdi ends his operatic career with a magnificent fugue, as difficult to conduct as it is engaging to hear.Gone are the pyramids, and the hunchbacks, and the murderers and the tubercular heroines. Gone are the monarchs wanting to kill their sons and the sons wanting to sleep with their step mothers. What's left is 'Tutto nel mondo eburla"--All the world is a joke, wisdom is laughter:

Posted by Christopher Purdy at 11:06 AM