Vedem (Czech: "In the Lead") was a magazine cobbled together by the teenage boys living in a "dorm" at the Terezin (Theresianstadt) concentration camps. It was thought by the Jewish elders of the camp that children would be better served if they could be distracted-even a little-from the horrors surrounding them.


Very few of the boys survived. The elderly gentleman in the clip are among them:.

"Every Friday night for two years between 1942 and 1944, they read aloud their week's contributions...At age fourteen, Petr Ginz became Vedem's first and only editor-in-chief. At age sixteen he was sent to his death in Auschwitz. 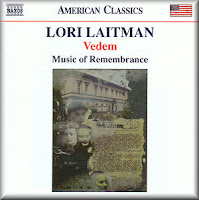 The oratorio of Vedem is important because it's beautiful, and Lori Laitman's music returns and amplifies the humanity of these boys so prevalent in their writing.  The score is melodic, clear, simple and deeply moving. The words are set to be heard. The words in of themselves are not high poetry. But I'll say it again, they were written by children facing death.The work is scored for  boy's choir, clarinet, cello and piano.

Vedem  was recorded by Naxos shortly after the 2010 premiere in Seattle.

Music from the holocaust (inspired by? devoted to? written during?) is not new. We've had cabaret songs, cantatas, art songs, oratorios. Composer Paul Krasna died at Auschwitz. His opera Brundibar was written for the children at Terezin to perform. Viktor Ullman is remembered today for his opera Der Kaiser von Atlantis in his death in the gas chambers. Contralto Ottilie Metzger perished, as did violinist Alma Rose, who was Mahler's niece. Tragically, on and on and on and on.

Vedem is simple and moving and let's the context of the words work their their magic.
Thank you, Lori Laitman. Boys, God bless you.


Posted by Christopher Purdy at 11:05 AM