Sidney Homer and Samuel Barber: Letters to a Young Composer 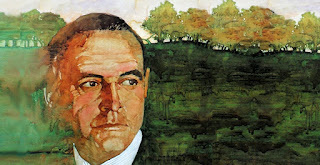 I'm reading Barbara Heyman's magisterial book about Samuel Barber, a must -read for anyone who loves music and wants to know about process.

Barber (1910-1981) best known for Adagio for Strings, Knoxville Summer of 1915, Essays for Orchestra, School for Scandal Overture, the operas Vanessa and Antony and Cleopatra,  and magnificent concerti for piano, for violin and for cello, was the nephew of the great contralto Louise Homer (1871-1947).

As much as an influence as 'Aunt Louise' must have been, she was Toscanini's Orfeo at the Met, it composer and educator Sidney Homer (18965-1953) that young Sam Barber found a nurturing influence. Heyman's book features many letters from 'Uncle Sid', filled with the kind of advice, encouragement and occasional kick in the pants any young person would be lucky to have from a mentor. 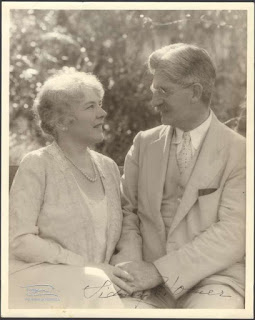 Don't miss Barbara Heyman's book. Sidney Homer's autobiography My Wife and I is a wonderful look at top level music making a century ago. There's alsoa  good discussion of Louise Homer's career in Andrew Davis's The American Opera Singer. Not to be missed is Anne Homer's biography of her mother, Louise Homer and the Gold Age of Opera.

I can't date these letters from Sidney to Sam. Barber wrote to his Uncle from age 10 until shortly before Sidney Homer died in 1953.

From Samuel Barber, the Composer and his Music  by Barbara Heyman

There are three things you must aim for definitely. The first is the development of taste that should, in time, amount to a passion for the best music in all forms.  Your whole life will be influenced by the forming of your taste in the next few years.

Taste is formed by coming into close and intimate contact with the great works of the masters. The way to do this is to look ahead and see what programs are to be given ...you can't attend all the concerts, therefore you pick the best. Suppose for instance, the Flonzaly Quartet is going to play a Beethoven Quartet. You get your ticket and you buy a copy of the quartet beforehand. You then learn more in an hour at the performance than you possibly could learn in any other way in a year.


The wonderful thing about art is that a man can conceal nothing; it reveals him as naked and unadorned...Sincerity and beauty seem to stand the test, but love for mankind and willingness to serve humbly seem to fill the world with joy.

You don't need opinions. A little praise is pleasant if you don't have to go too far out of your way to get it, but you will have to learn to get along without opinions.  Opinions don't change a note of add to your stature. If you can give pleasure, well and good. Your work is your own affair and yours only.  Depending on opinion means less independence in your work. It also means laying yourself open to pinpricks which may be boresome. It can result in uncertainty. Even too much praise can do things, introduce a smirk and too much gush in your style.
_____

The paucity of titles in the musical world is alarming. It indicates a lack. Perhaps language is inadequate. If so, then young men like you must invent something and not go on serenading and suite-ing.

I can imagine how Beethoven felt when they stormed at him for writing the third symphony. If he believed all they said he could feel like a criminal, a debaser of public taste. I do not know a single man who hasn't had rocks in his life. Brahms had plenty. A good deal depends on how we handle them. They may not be so serious in themselves, but if we get flustered and lose our heads we can force them to do us considerable harm...Poise, equanimity, philosophy, a sense of proportion, gratitude for what we have, a "calm center", fixed determination and an inflexible purpose are all to the good.

Resentment, impatience, self pity, exaggerated self deprecation, an intense consciousness of the need of making good in the eyes of others, a lack of grit in meeting emergencies, a general complaining of spirit and weak sporting blood are all to the bad.

Take some boy you know and put him in your place. He wrote your sonata, and your serenade, and struggled with your concerto. How do you regard him, dispassionately? Do you congratulate him on his gifts and what he has achieved and feel that, with good sense and intelligent self-control, he can carry his powers to a high state of development, or do you feel that he is a broken reed, a cracked canoe, smashed on the rocks of a difficult concerto, a hopeless wreck because his teacher does not agree with his opinion of his latest work? Take a sincere, objective view of your friend and make up your mind how  you wish him to feel and proceed. Then act accordingly. Don't dodge. Be as strict with yourself as you would be with him.

There is one thing that I want to make clear  to you and that is that resentment does not get us anywhere. It only eats the heart out of the resenter, and what good is there to that? I often think that a good friend could have saved Bizet's life at the time Carmen was produced. Patience and a sense of humor are wonderful lifesavers...Through it all a rhinoceros hide is a good thing. The bigger the talent the tougher the hide, say I....Resentment eats the heart, but philosophy is an armor that protects the source of future work which is the one thing that must be kept inviolate. 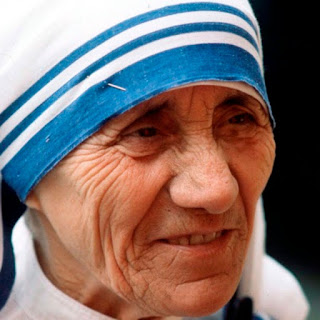 Watching the canonization mass for Mother Teresa of Calcutta, I realize there are many who do not think well of her. She took money from dictators.. She did not provide adequate medical care. She traveled the world fostering her own cult of personality and left the destitute behind her. I've heard these things said about her, and worse. In particular there are medical personnel who have been appalled at the conditions at the House of the Dying in Calcutta. The Church in desperate need of positive PR has glommed on to her.

I've never been to Calcutta and what I know about Mother Teresa I've heard from sympathetic reports. It has never been my understanding that Mother Teresa intended to take the dying destitute off the streets and cure them. In 1949, there were no cures. Except the need of a cure for poverty and loneliness, and we are still not there. Instead, I always thought Mother Teresa's goal was to insist that all persons when they come to die do so in love.

I have worked in hospitals and I have worked among the dying. It is often sad, exhausting, messy, gross and disgusting work. How many doing this work have been repelled, even as they work so hard toward compassion?

Mother Teresa got the most unloved people in India off the streets, into shelter and in surroundings far better than they would ever had had. Far worse than most of us can imagine, but far better than the streets to which they had been abandoned. People were washed and fed and cared for. Was this revolutionary in India, anywhere in 1949?

Her point was not medical cure but spiritual comfort. That's hard to understand but I believe this to be at the center of her mission.

It's a comfort to know that Mother Teresa herself struggled for years with doubt an loneliness. Acknowledging these doubts may have allowed this tiny woman to persevere. I'm not sure I believe in saints, or heaven, or sometimes even in God. Maybe I have that in common with Mother Teresa. I can't imagine what she'd make of being called a saint.

But somehow she was energized to do what no one had done before in taking in that first dying man .
She found mission where others found abhorrence. She channelled despair of her own crises of faith into service. And she kept doing it until she died, and she got others to do it, and continue doing it. Call it sainthood or call it charity or call it nuts. I watched the canonization of Mother Teresa with a full heart.
Posted by Christopher Purdy at 3:41 PM No comments: