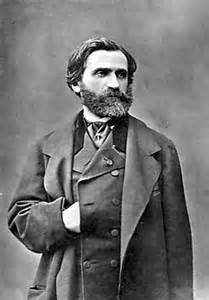 Continuing the One a Day thread honoring Giuseppe Verdi's bi
centennial. I listened to these operas over the past ten days. I'm hoping to go through all of them in chronological order. I'm, only offering a few gut reaction comments. I'm not a musicologist. Join in!

I Lombardi all prima crociata The Lombards in the First Crusade  1843
Temistocle Solera  La Scala, Milan 1843

Another hit on the heels of Nabucco, I've always enjoyed I Lombardi without being moved my much of it. The plot is so convoluted, I have to close my eyes and listen. Lombardi has Verdi's first wonderful tenor aria, Le mie letizie infondere. The great trio Qual volutta trascorere had an extended violin solo, an innovation for such a young composer. The finale withs its musical glimpses of Jerusalem is theatrical and effective. Verdi was quickly becoming a real theater geek. I Lombardi is an opera for artists, not only singers.

It's taken me a while to savor Ernani. The distillation of Victor Hugo's massive Hernani seems clumsy. Verdi himself admonished librettist Piave: "Brevity!" Listening again and paying attention I realize Ernani is the first Verdi opera to create believable characters. The situations may be bizzare, but Carlo's torment is convincing, as is Ernani's nobility and Elvira's grandeur. Don Silva actually moves  us with Infelice! E tu credevi? Who is the real villain in this piece? Not easy to say. Rosa Ponselle called this "the baritone's opera". He is absent for the Act IV trio which to me is the most exciting part of the score.

When this recording was released over thirty years ago it was the first time most people  had heard of I due Foscari. It's a compact opera, meaning a lot happens in a brief performance time (less than 2 hours) The bel canto model of aria/cabaletta is followed. There is less distinguished music than Lombardi or Ernani. But there's a momentum that's hard to resist. The characters are opaque, but the rum tum clang is fun and exciting.

Posted by Christopher Purdy at 9:40 AM