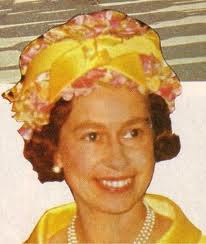 If you do a web search queen in boston you'll get endless pictures of Freddie Mercury in full regalia. You won't get Her Majesty Queen Elizabeth II. But I'm hear to tell you, the Queen of England, pre-Diana, came to Boston on July 4, 1976. She stopped long enough to review a parade, be received by Mayor White and Governor and Mrs. Dukakis ("loved her....him not so much)


I was working for the city in 1976. Boston 200 came out of the Mayor's office the year before to promote Boston as a tourist destination and to insure international coverage of the the area.  In 1976 Boston was still being ripped apart by the busing crisis. IT was thought necessary to do a lot of image rebuilding.President Ford had given a speech on the Battle Green in Lexington on April 19, 1975-200 years to the day of the start of the American Revolution on that spot. Ford probably had few friends in the People's Republic of Lexington. Still, he was President even if the Secret Service and assorted hangers on f-ed up the morning pancake breakfast.


The next year as I recall Lexington was quieter-but crowded. (I wonder if it is still?). Faneuil hall market was meant to be the centerpiece of Boston's 200. This noble hall was kept in good condition. It was the location of the first meeting of the Continental Congress. Here the American government took hold as the revolution began. It was a beautiful building yes, but the water frornt area back of it had become a decrepit mess. Those of you used to the $5 million dollar condos need to trust me. It was a shit hole.

The Quincy market buildings were to be renovated and become downtown  arcades near the harbor. All the tourist crap we all love would be available, along with chowdah, Regina's pizza (be still my heart) and the legendary Durgin Park, home of Johnny-cake and abusive waitresses.

Boston 200 had installed an interactive exhibit (not a word in use then) on the construction site. It involved several stations where a visitor was presented with a number of choices and by the end you were deemed either patriot or Tory. It was not air-conditioned. It was filled with construction sight sounds and smells.  It was fun.

As a tour guide I was part of the team chosen for crowd control during the Queen's visit. Who am I kidding? I was a fubsy nineteen year old, arranged with other such, either from the tony suburbs or the hood. There was a mob of people at the back side of city hall, awaiting Herself's motorcade. There was a large contingent of IRA supporters who were loud and loudly cheered by the crowd. "Bitch go home" was the least of it.

Finally The Queen arrived, with the Duke of Edinburgh . Just like his pictures today, walking three steps behind the royal missus hands clasped behind his back,. The Queen was shown to a reviewing stand, as the endless lines of school bands, paunchy guys in battle reenact garb (how many minute men does it take to change a light bulb?) little girls in mop caps and the cub scouts paraded by.

I was fairly close to the reviewing stand. The Queen wore a red straw hat and a flowered dress and she frowned the entire time. She didn't look blank or bored, she actually frowned. Could it be the Friendly Sons of St. Patrick's  refusal to march pissed her off? Who knows?

There was a lunch in City Hall. If you've never seen Boston's City Hall here's a story told me by a friend who was working the Royal luncheon. Prince Phillip needed to go to the men's room. He was walked to the nearest loo and commented, This is an interesting building" to which his guide replied "Ah you kiddin'? Whoeveah fuckin' designed it was on drugs!" (I.M. Pei and I agree, whoever designed it was on drugs)

There was a speech in Fanueil Hall and dinner with the Fords that night. I hope The Queen stopped frowning (who makes mean faces at little kids marching past and smiling up at you?) It could be she wanted lobstah or at least a clam role and tickets to the Sox that night. Instead she got Gerald Ford and the cub scouts. But I can't say the Queen made a good impression. Mrs. Dukakis, in a fetching straw hat herself, carried the fashion day. And she smiled at the kids.
Posted by Christopher Purdy at 3:33 PM

I was stationed at Ft. Devens, MA at that time. The Company that I was assigned to had a Revolutionary War Reenactment group who marched in the Boston 4th of July Parade in Boston. Queen Elizabeth and Prince Edward were there overseeing the parade. Then they came down a line and shook all of our hands. I have a photo of the Royal Couple looking at our group as we marched by the Official Stand. Unfortunately I can't access the photo right now.