I sat there last night in this dingy church basement with a crummy piano and I listened to our cast sing this show for the 768th time...and I marveled all of the voices and enjoyed every moment of what I was hearing. I still am not tired of Gianni Schicchi. I still get a real lift when Lauretta and Rinuccio begin their duet "addio, speranza bella"...I still laugh at Gianni's first lines: What a sad looking bunch of people. Buoso Donati must be recovering! I still chuckle when Zita crows, "No No No un momento! Pezzo di lei!"

The longer I study this score the more I marvel and how well constructed this opera is. Puccini was such a master. He mixes exquisite melody with cynicism, romance and comedy. All is 53 minutes.

All of our cast have voices appropriate to their roles. Our Schicchi is a world class baritone. I'd tell you to write his name down but I promised not to use names on this blog. All the more reason for you to come to the show: 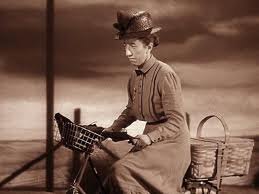 Adorable soprano and a tenor who has a nice macho swagger and is not afraid of sweetness. Our Zita isn't afraid to be nasty. Last night she channeled Miss Gulch, pretty woman that she is. And a fantastic voice. One is a Verdi mezzo waiting to happen. Another is working on a big boy tenor career.

Something else happened last night. After a photo shoot a few of the cast went out for pizza. I took the opportunity to tell something of our Maestro's background. The artists he grew up hearing.The level of music making that was put into his bones as a young child. He knew and worked with Tebaldi, Bastiannini, DiStefano, Callas, Muti, de Sabata, huge names. Huge huge huge names. And here  he is in a church basement teaching young artists Gianni Schicchi word by word. Count your blessings. If you listen enough and apply what he says to characterizations you may very well go to the head of the class in auditions.

Okay, here's a story and a voice. Puccini died in 1924. A few months before his death he was sitting at an outdoor cafe near his home with a few hunting buddies. A woman with long black hair came up behind him, hit him on the back and said-in Italian-Hi there, I'm a red skin from New York. Apparently the Maestro was not impressed and was this close to calling the carbinieri when the lady laughed and revealed herself to be Rosa Ponselle. In 1924, Ponselle, who was 27,  was already considered THE great Italianate soprano (She was born Rose Ponzillo in Meriden, Connecticut) Puccini got the joke and Ponselle later sang Vissi d'arte for him. Puccini remarked, "What a shame I have heard this voice, too late."

Posted by Christopher Purdy at 10:50 AM