This is the Spanish tenor Hipolito Lazaro (1887-1974).  Puccini was a big fan. He tried to get Lazaro for Turandot but senor tenore anted too much money. La Scala wouldn't pay it. I love Lazaro's ego: "Caruso is my understudy!" he would cry. As if.


Late rehearsals often go to shit. Here's the combination. Italian conductor leading a newly formed band, mostly young people. A cramped performance space. Lights being run for the first time. An antsy 11 year old. Balance issues. Oh, and did I mention we were told a tornado was en route. If you have opera, who needs a tornado? We didn't get one.

We did get, against the odds, a wonderful tech run last night. I sent out a few notes. None to Gianni himself because there's nothing I can add to his performance. Lauretta isn't too sweet and it just bitchy enough. Bitchy is more interesting any day. Simone practically re-staged the finale, thanks be to God, lugging the very table off stage with the other loot. Nella and Ciesca don't have enough to do vocally, but on stage throughout they are gorgeous. Zita...how this lady known for her equanimity can be such a meany on stage is a testament to art. Rinuccio is just horny enough without being a pig. I myself have no objections to horniness, distant memory it may be, but there's a fine line to vulgarity. I hate vulgarity in opera. Did I tell you about the production of Un ballo in mashera in Spain...where the curtain opened on a row of men sitting on toilets with their pants down. One critic was smart enough to say, "The beasts didn't even wipe their bottoms!"


The Maestro just phoned. He was full of praise for the singers and orchestra. His greatest concern  balance. It was good last night and it will be better with an audience. 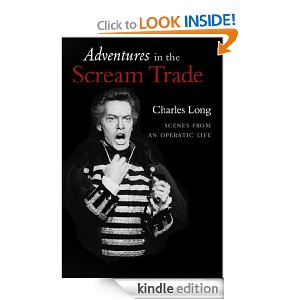 I e mailed my buddy Charles Long abut this production and about our Schicchi in particular. Charles was a New York City Opera baritone with a strong regional carer through the 1980s. He's just published a memoir called Adventures in the Scream Trade. Anyone wanting a career in opera needs to read this book. Go to confession first, if you're Catholic because you are going to die laughing. I discuss the book elsewhere on this blog. Do a search. Charles and I were lamenting the shitti-ness of some of the opera business-getting in always about who you  know and often about who you shtup (and I'd get it in writing) I needed his advice about how to help singers up the next step. Read his book.

Final dress tonight. Two complete runs. Stage the curtain call in between. And so to bed.
Posted by Christopher Purdy at 10:33 AM