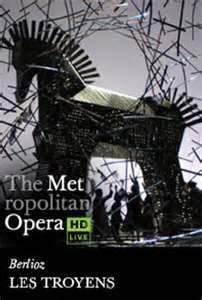 Last night I attended the encore showing of the Metropolitan Opera's live performance of Berlioz's opera Les Troyens. This is a five hour French grand opera based on Virgil's Aeneid.


(The above clip is from 1982-not the current production)

The Trojan war is a big deal for an opera. you think Aida is a big show? Gotterdammerung? You've never seen Les Troyens. Not only is it long, a huge orchestra and chorus are front and center. And there is no tenor alive who can truly sing Aeneas.


Until now. BRYAN HYMEL. Who knew? Nice young guy from New Orleans. He came late to the production, with "two hours of rehearsal." This is a well focused, tight voice with a touch of metal and no breaks way up to D above High C. No part of this grueling role seemed difficult for Hymel. I haven't heard such an ovation-well deserved-since the prime of Dame Joan Sutherland.

Who is more beautiful than Susan Graham? In her fifties, she's just now at the peak of her loveliness. Hers is a warm, beautiful mezzo soprano. Tomato soup with Ritz crackers on a cold night. One of those melted chocolate voices where you can just wallow.


I don't think Cassandra is Deborah Voigt's best role. The music gives her little opportunity to soar. I kept waiting for her flash of silver voice to really peal forth.She said later she was ready to get back on her horse (Brunhilde!) Dwayne Croft-who I think is undervalued-brought a beautiful voice to a thankless role. Karen Cargill sang Anna with a voice you want to marry. What a deep, luscious sound More!

But folks. The dancing! It was long! I know its French opera where a ballet is de rigeur (am I cute or what?) This is a long opera. I don't think there's a wasted note. There's a great scene in part two where Dido and Aeneas celebrate their love. And in the midst the loving couple is on a satin settee..NOT ALONE! Aeneas' son Ascanius is cuddled up, along with  the sage Iopas (Tenor Eric Cutler-superb) and dancing dancing dancing. 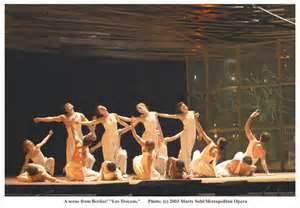 Don't be mad. I like T&A as well as the next guy.  The white costumes were flattering or at least enticing. A lovely tush is always a treat. But to me this was extended coitus interruptus-the only longueurs of a long evening. The dances were great. And hot. But it did seem to go on and on and on. What I want to know is what were Dido, Aeneas, Ascanius, Anna and Iopas thinking cuddled up in satin with nothing to sing.

Never mind. Perhaps had I attended the live-live showing at 12 noon I would have been fresher and more able to appreciate the dancers skill over booty.
Posted by Christopher Purdy at 12:00 PM