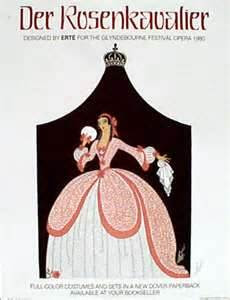 Okay, I know its a cute headline. It's a new year, so you gotta give me one.

I've been doing some prep work for this weekend's Columbus Symphony concerts and pre-perforamce talks. The Waltzes form Der Rosenkavalier conclude the program. Pavlov's dogs slobbered ovber steak. I love the way music can take one back or provide a vitamin pill of memory.

The Knight of the Rose was first performed in 1911. In the Vienna of Maria Theresa-Mozart's Vienna-we meet a lovely princess, considered old at 32, and her handsome, dashing 17 year old lover, Count Octavian Rofanpo. The role of Octavian is played by a woman in male drag. Yes it contributes to a naughtiness inherent in the music. It was common in Mozart's day for young men to be portrayed by women. Strauss and his librettist, Hugo von Hofmansthal, recreated Mozart' era and Mozart's ethos. Strauss and Hofmansthal hoped that Scottish soprano Mary Garden (1874-1967) would play Octavian, but she-no fool-told the press "It would bore me to make love to a woman." You gotta love her.

The Waltz was new in the 1770s , and considered a peasant dance. It was fine to boff a 17 year old when your husband's out of town -but dancing cheek to cheek as it were was considered scandalous, or at least low class. The Princess has a country bumpkin cousin, Baron Ochs (yes, OX-you got it). Count Octavian and the Baron's young, dewy and rich fiance, Sophie fall in love. Ochs is furious and after a few belts of tokay, challenges Octavian to a duel. He is thus pricked in the arm, and falls screaming "murder"-and rather than dying, he grumbles to a waltz tune:


"Ohne mich, jeder Tag  dir zu dang; Mit mir, mit mir keine nacht wir so lang":
Without me, every day is a misery...With me, no night is too long."

What there was of a waltz in the 1770s was nasty but had turned elegant and sexy by 1911.
I wish I could say the guy gets the girl at the end of this opera-he does, except remember he is played by a she even tho she is meant to be a he in the opera so no, they aren't lesbians. Get it? As with any opera plot, you might need to write this down. I understood this better 20 years ago before I joined AA. Twenty- five years ago I found myself having to explain this opera in detail to a room full of nuns. Still drinking then, thank God.

Withal, Rosenkavalier can always get me out of the blues. Not only the above quoted waltz, but especially the brilliant hustle bustle of Act 2-as we meet the precocious and spitfire young Sophie,


No, they aren't doing the entire opera this weekend. just the Waltzes, along with Mozart and Johann Strauss
Columbus Symphony Fri-Sat 8 PM Ohio Theater. I give pre -concert talks both nights at 7. You don't get to skip the yak just because you've read this far..
Posted by Christopher Purdy at 3:13 PM