Monica Wood and When We Were the Kennedys 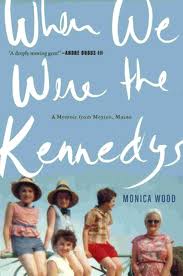 Did you know there's a Mexico, in Maine?

You will, and Monica Wood's new memoir When We Were the Kennedys will tell you all about Mexico, Maine and leave you begging for more

This was one of those books on a library display wall. I'd never heard of Monica Wood. I visited Maine often, in fact I was married there, but in touristy, faux-cute Maine.And the Maine people I knew catered to those visitors (summah people). Mexico is in Western Maine, far inland. It was the birthplace of Ed McMahon! But it was most crucially for this book the home of the Oxford Paper Company, the area's pollutant and largest employer. Ms. Wood makes clear. No mill, no schools, no doctors, no grocery stores, no libraries, no people. The mill didn't provide jobs, the mill was jobs-to residents of Mexico, Rumford and environs.

Monica Wood gives us the few years immediately following her father's sudden death on April 25, 1963. He was on his way to work, lunch pail in tow. (My father had a lunch pail. So did yours. The rest of you can ask your grandparents) Mr. Wood just...died. right there in the garage. Gone. Over and out. He left a widow and five children,  and a brother in law who adored him. In fact, if you're looking for a cold, taciturn down-easter paterfamilias,  look elsewhere.

There's an older son, Barry, a musician who works in the mill. Anne, who teaches school, and as the neighbors lamented "those three little girls". Betty is what we'd call today a "special needs child." Monica and Cathy are at home. Mum goes from  self reliance to a woman taking to her bed at every opportunity.


President Kennedy is assassinated the following November. the Wood family isn't close to recovering from Dad's unexpected death. Now another  family has lost their father, and the whole country lost a father figure. Irish Catholics took President Kennedy's death personally. I know. I was raised in a similar environment.

There are Catholic Schools, benevolent nuns (no silly jokes here) Father Bob, Mum's younger brother who thought of Dad as his own father, and who is undone by grief. There are nosy, difficult landlords from another old country, (Lithuania) kindly neighbors and good friends. No villains in this book. So is it too sweet, too cloying and unrealistic?

No. Along with the nice people there is on every page a sense of loss and grief  that complements the rest of the story, never weighing it down. Father Bob and Mum both die of cancer, too early. S Anne the school teacher sister gets married....at the age of 68! The mills change hands multiple times before dying away, taking Monica Wood's world with it. And by the last page of When We Were the Kennedys, you'll wish that Mr.Wood was your Dad.

Posted by Christopher Purdy at 2:44 PM

Email ThisBlogThis!Share to TwitterShare to FacebookShare to Pinterest
Labels: maine; maine; when we were the kennedys; christopher purdy; jfk assasination; 1963, monica wood; mexico