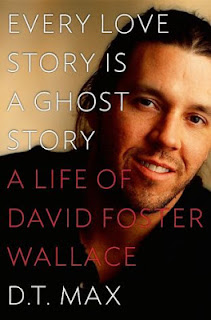 D.T. Max is a staff writer for the New Yorker, and the author of a medical mystery, The Family That Couldn't Sleep.

Every Love Story is a Ghost Story is D.T. Max's  is a new biography of writer David Foster Wallace, (1946-2008) either the most original writer of the last thirty years, or a literary con man.
Take your pick D.T. Max comes down in the former camp and he'll take you there as well.

"David and I are just a year apart in age. When he published his first novel, The Broom of the System, it was a revelation to me to read such an extraordinary, funny,  masterful and overwrought piece of prose from someone my own age...When David Remnick, editor of The New Yorker asked me to write a piece about David's death, I was immediately interested, because I knew so little about David Foster Wallace. I didn't know that he had depression, I didn't know that he had addiction issues, I didn't know how funny he was."

For those who have yet to encounter Wallace's work, Max says,

"David Foster Wallace mastered a kind of writing that really had not been done before.  Long,  winding sentences that try and capture everything about the world.  They are what it sounds like when you think. (italics mine.) They are the sound of our own minds going....David brought a wonderful knowledge of sentence structure and how a sentence should sound to this disorderly, exciting kind of mental state...the sort of David Foster Wallace mind dump."


By the time of his suicide in 2008, Wallace was the author of several collections of short stories and non fiction, and his massive novel, Infinite Jest. This 1,000 page novel runs from locker room towel snapping to very detailed discussions of experimental films made by the deceased, but still very present father of one of the novel's leading characters.  There are massive of footnotes as well, and some of the footnotes have footnotes, every word worth reading. You will stay with this book even if you wonder why it so entertaining.

"Infinite Jest is less difficult than most people think. It makes it hard at times to know where you are, but its really an absolutely wonderful story, or really two stories, partially a story about a bunch of kids at a tennis academy outside of Boston, and its partially about a bunch of recovering addicts in a half way house that's just down the hill. David wanted people to read this book. He was not James Joyce. He did not want to make it impossible for you to understand what's going on.

Max recommends "modestly submitted" Every Love Story is a Ghost Story as a good primer to Wallace's work (he's right) and recommends the on line "road maps" for Infinite Jest. "These reassure you that you are going somewhere, especially early in the book when you have reason to doubt!"

Every Love Story is a Ghost Story  is no facile expose of a life of addiction and mental illness interspersed with flashes of brilliance. It's impressive literary criticism, along with the facts of a complex life.

"I didn't want to write about David without writing about David as a writer. It tries to relate the writing to the life and the life to the writing...In the years since his death (2008) he's become a kind of person people just want to know about. There's a kind of moral force around David, especially for younger people, there's a cliched "Saint Dave"...David used to say when he didn't like something he'd go straight to the bathroom, and that would make him go straight to the bathroom. People think of him as someone who had experiences and wrote about them in ways can help them be stronger, and be more centered and happy in their lives.  That's his great theme, that he's writing for you. He's writing for you as a reader, so you can take away, experience and knowledge that will help you to experience your life more fully . It's a big task. Most fiction writers don't do that, . David wanted you to emerge from his books stronger ."

"I tell people when I started this book I was in love with David Foster Wallace, and when I finished it I was even more in love with David Foster Wallace.  People ask how that's possible...you show so many of his flaws, but to me he's like a Thomas Merton . He's somebody who lived hard in the world and made a lot of mistakes. He did a lot of learning. We can learn from him. In writing the book,  I was trying to learn what David was trying to teach me, about how to live more fully in the world. Our saints today are not going to be virgins! David spent much of his life in 12 step programs. I think that's where he learned that its only those who've been there who know how to get out of the cul-de-sac that we're in, or how to avoid getting into that dead end. That to me is David's great value."


Posted by Christopher Purdy at 11:25 AM