Howard Zinn A Life on the Left: An Interview with Martin Duberman 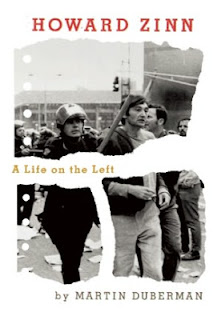 No doubt about it, Zinn's political views were radical. His 1980 book A People's History of the United States presented an antidote to history textbooks celebrating white male supremacy. This book infuriated many, and does not pretend to be impartial. A People's History has been updated several times and has never been out of print.


Howard Zinn was on the faculty of Spelman College, then an all-black institution for women from 1956 until he was fired in 1963. While at Spelman, Zinn participated in bus boycotts, restaurant sit -ins and was very much involved with the attempts at desegregation, complete with physical abuse and several arrests.  He moved on to Boston University, where he was Professor of History from 1964 to 1988. His time there was marked by a rancorous relationship with BU President John Silber, described as a brilliant intellect by some and a fascist by some others. Zinn was among the highest profile BU faculty, and at the time of his retirement was the lowest paid professor in the University.

Here's part of my conversation with Martin Duberman, who has written the first biography of Howard Zinn,

CP: What attracted you to Howard Zinn?

MD:  I knew Howard somewhat. We were never close friends, but we would pass here and there and say a few words. I also had met his wife, Roz. Howard and I had almost always been on the same wavelength politically, at least in the early years. I went on to become interested in feminism and the gay rights movement, and those two issues never became central to Howard's agenda.

CP: Do you consider Howard Zinn a political scientist, a professor, how would you describe him?

MD: These discipline boundaries are so artificial.  He certainly was a historian. He also was a political theorist, and he also wrote to some extent about group behavior, so he was a sociologist as well.
...It wasn't fun and games for Howard. He was a deeply principled man who was very committed to the causes he took on.

CP: It seems to me that Zinn was not afraid not only to stand up for his own principles but also to question the motivation and principles of those with whom e disagreed.

MD: I think that's quite true. Howard was fearless, and strongly held to certain views, and stuck to them, regardless of the abuse that he received.  He as always himself. He was a man without any affectation.

CP: Where do you think his passion came from?

MD: I think it came in part from being born into a poor, Jewish immigrant family, and I mean very poor. Often the only way they could have a roof over their heads was from his resourceful mother, to find an apartment where the first month's rent was free and then they had to pay the second month, and then they would always leave, and find a similar deal somewhere else. Both his parents had very limited education, both worked very hard. His father was a window washer and a waiter, even when he suffered severe back problems  he had to go on doing those jobs, because there were no alternatives. Howard grew up knowing full well the central American myth, that anybody can get anywhere if they're willing to put in the hard work, he knew that was nonsense.

CP: Which of Zinn's many books would you consider essential to understanding who he was?

MD: Probably his autobiography, You Can't Be Neutral on a Moving Train. I don't think its his best book, but if a reader his interested in his life as opposed to his political activities that would be the book. But he's never very revelatory about his inner life and his relationships. That wasn't Howard. He was very much a public figure, and in fact he went out of his way to conceal his private life to the point when I arrived at the archives, I discovered that almost all personal correspondence he had destroyed. I think the main reason was he didn't want to get political fiends into trouble for anything they had written to him. And also, Howard was very private.  He simply didn't talk about his inner feelings.


CP: Zinn was on the faculty of Boston University for many years. For much of that time he had to deal with the President of the University, John Silber. The two men did not see eye to eye. It often became very difficult and ugly. Why do you think Howard Zinn stayed at BU? He probably could have gone many other places?

MD:  No, I'm not sure that's true. Howard's politics were very radical. The subtitle of my book is a life on the left.By the 1980s. certainly;y in the Reagan years, there weren't many other places Howard could have gone. I didn't come across any invitations offering him positions. Until he wrote A People's History,his big selling book, the family lived on his BU salary.  John Silber always saw to it that Howard was the lowest paid full professor in the University.  So he couldn't afford to simply resign.  After People's History was published, which by now I think has sold around two ad a half million copies., and ever year the book sells more than in the year preceding-and the book was published in 1980. But it was only then that he had extra income.

CP: A People's History was saying the exact opposite of what many people were taught in the public schools
I thik Howard Zinn and his books have a lot to do with requiring kids today to think critically.

MD: Absolutely,.  The year before People History came out there had been a very respected study of high school textbooks. The study showed overwhelmingly the heroic lives of our presidents and business elite. No mention was made of the uglier parts of our history. Certainly no mention was made of the working class and the poor, and the various strikes they engaged in order to better their condition.  It was a shocking study, because it showed that American children are indoctrinated generally with a triumphalist  version of American history.

I think its better now, thanks to Howard and other young radicals who are writing textbooks.

Howard's main issues were centered in race and class. He made a few gestures later in life to feminism and the gay rights movement. But Howard's house had long been built. His orientation was toward race and class. No matter what generation you belong to, you are born into a certain set of problems, and if you're an activist, those are the ones you tend to be drawn to. Feminism and gay rights were simply not salient movements when Howard was coming up in the 1930s and 40s. But he never said a negative word about either of those movements.

CP: Finally, how would you sum up Howard Zinn?

MD: As a person Howard was a very gentle and kind and generous human beig. I hate reducing a life to one lesson, but if I have to I'd say what Howard's life demonstrates is that it is possible and necessary to commit oneself to public issues, at least to some extent.  Howard was a professional historian and political scientist, bu he recognized he was also a citizen. We are responsible for the ills of our society. As citizens, we have the responsibility to lend our efforts to some degree. We can't simply be self absorbed consumers. I think that's the lesson of Howard's life.

Posted by Christopher Purdy at 2:04 PM