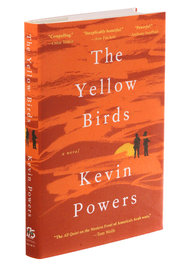 This is one of the most moving books I've read in a long time.
Two very young soldiers bond in Iraq.
Bond may be the wrong word.
One soldier promises the other soldier he will look after her soon.
This promise becomes a duty, a vow and an imposition.
The son is 18-the other soldier 21.
They are led by a Sergeant not yet thirty.
Even he tough guy asks how old they are? Then he sighs and says look, stay close to me.

We move between the middle east, the U.S. military hospitals in Germany and home:  small towns in the U.S. where nothing extraordinary happens.

I won't give it away. It's a brief book, just over 200 pages but a slow read in the best sense.
The writing is rich but compact. Mr. Powers knows how to chose words. He writes with and austerity that fits the plot and situations-and I kept re reading paragraphs so as not to miss the smallest detail.

Whatever your political affiliations or your views on war-this book will haunt you.

Tom Wolfe has called The Yellow Birds "The All Quiet on the Western Front of America's Arab wars."
I call it an important and devastating read.

I believe this is Mr. Powers's first novel. I especially love writers who come out of nowhere and hit it outta the park.
Posted by Christopher Purdy at 12:59 PM