Who's Woody Hayes or How I Learned to Spell TBDBITL 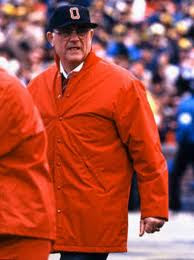 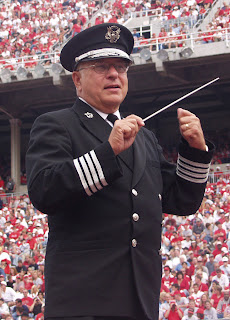 BROADCAST TRIBUTE TO Dr. JON WOODS AND THE OHIO STATE UNIVERSITY MARCHING BAND, SUNDAY, JANUARY 1 @ 3 PM on CLASSICAL 101 or on line at www.wosu.org

This is Script Ohio, originated in 1936 at The Ohio State University. The precision is killing and the effect sensational, for those lucky enough to score OSU tickets and their friends in TV land.

When I first came to Columbus twenty years ago I recall driving around The Ohio State University campus. I work on campus now, I'm an OSU alumnus-in my dotage, taking classes with my 'grandchildren'-and I live two miles from the 'Shoe.' I can hear the band warming up from my front yard. That's today. In 1991 when I crossed Woody Hayes Boulevard I thought, Oh yes, I can live here. They must love music. They've named a street after a big-band leader.

(A digression: I've worn a beard since I was 17. My beloved Grandmother, when she first saw more than peach fuzz-an orchard, a dirty one!- on my face, said, "Oh no. You look like Gabby Hayes." So that name remained iconic for me even though I didn't know who the ---- was Gabby Hayes. He was a character actor in Westerns, much loved. He died in 1969 and never led a band in his life.)

Woody Hayes was the sainted coach of The Ohio State University football team. You loved him or hated him. You can have all the block Os and scarlet and gray you like but Woody Hayes was and is the "brand" of The Ohio State University. He was forced to resign in 1976 for striking a player. May not have been the first time. He died in 1987. If there is a God, at least in college football, his name is Woody Hayes. And I'm confusing him with Gabby Hayes, who was never a big-band leader. Sheesh.

Al ll the more reason then for me to try and make it right. Dr. Jon Woods, the beloved Director of The Ohio State University Marching Band, is retiring in April.

I've produced a broadcast special in his honor-to air on New Year's Day at 3 p.m. I don't know if Woody Hayes goes second to The Best Damned Band in the Land (hence TBDBITL) but its really, really close. The band is sensational. Woody or Gabby, the band is great. Dr. Woods is an inspiring leader and music educator. Mrs. Woods came on the show to add some pepper. There are tributes from a few (very) high profilers in the community-and Dave Carwile, The Voice of TBDBITL, provides insight and continuity. I enjoyed meeting Dr. woods and I really enjoyed, after 20 years, immersing myself in the band, on CD and on Youtube. Script Ohio is nothing if not operatic. But that's another story.

BROADCAST TRIBUTE TO DR. JON WOODS AND THE OHIO STATE UNIVERSITY MARCHING BAND....SUNDAY JANUARY 1 @ 3 PM on Classical 101 or on line at www.wosu.org