The Love Goddess and The Piano Player 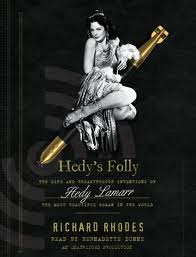 Question: What movie siren tamed up with a piano player to develop a new radio controlled device used to guide torpedoes? Mae West and Paderewski? Marilyn Monroe and Horowitz? Nope. The answer is Hedy Lamar and George Antheil. And okay, the youtube clip probably gave it away.

The Lamar Antheil partnership and the resulting patents are discussed in a fascinating new book, Hedy's Folly by Richard Rhodes. Mr. Rhodes has written extensively on nuclear warfare. Even so, a discussion of the love goddess and an esoteric composer must have been a departure for him. His is a fascinating blend of high science and show business.

Hedy Lamar was born Hedy Kiesler in Vienna. She began in the theater and in 1931 appeared in a film produced in Czechoslovakia, Ecstasy. You bet. The film became infamous for Hedy's limbs and considerable charms and attributes. It was banned in the States. Rhodes goes so far as to quote Louis B Mayer, who on his first meeting with the actress told her, "You'd never get away with that stuff in Hollywood. Never. A women's ass is for her husband, not theatergoers. You're lovely, but I have the family point of view. I don't like what people would think about a girl who flits bare-assed around a sixteen."

Nice. God got him. Hedy was rechristened and went to MGM and was a name in pictures for 20 years. She was not a star of the first rank, but she was good enough for Clark Gable and Charles Boyer.

Meanwhile, composer George Antheil and his wife Boski were living in Paris upstairs from Sylvia Beach's bookstore. His Ballet mechanique required sixteen synchronized player pianos-and when he couldn't get them to run properly the performance of this , well, different work became infamous. There's no such thing a bad publicity. Antheil too arrived in Hollywood to write film music-but the studios were slim pickings for him. He composed, he taught and he wrote-about the effects a man's glands have on his sex drive-and he wrote a book which accurately predicted World War II.

Hedy had been married to an Austrian weapons baron called Friederich Mandl. She was the trophy wife and the marriage was a gilded prison. Nevertheless, she listening carefully to the dinner table conversations as the munitions big wigs were helping birth Nazi Germany. She got away, but between takes at MGM-plus five more marriages and two kids-Hedy remembered everything. She had a penchant for invention. A cube morphing into soda pop with a little water was an early flop.

George Antheil was at loose ends in Hollywood but he knew his way around mechanics and physics. Hedy Lamar was bored. The two got together. It is suggested that Antheil,while quite the horndog, was never romantically involved with Hedy Lamar. They spent their time together drawing and designing a device to guide torpedoes-there was 60% failure rate, and this along with the wartime death of Antheil's beloved kid brother, motivated the two towards invention. Patents were awarded to Hedy Kiesler Markey (a quickie marriage) and George Antheil in 1942. And the patents were buried, though the navy held on to them. Hedy's film career continued. George's music began to attract a lot of notice. Patents ran out in 1959, a year after George Antheil's death.

Hedy retired and lived on to 2000-she died at 85. Toward the end of her life the story of her invention was reintroduced by scientist/army colonel Dave Hughes. Hedy was awarded a medal from the Electronic Frontier Foundation. Great movie beauties do not parade around in their 80s. She sent a recording to the awards banquet, "I hope you feel good as well as I feel good about it, and it was not done in vain. Thank you."

But there was more. "Never a letter. Never a thank you. Never money. I don't know. I guess they just take and forget about a person."
Posted by Christopher Purdy at 11:18 AM