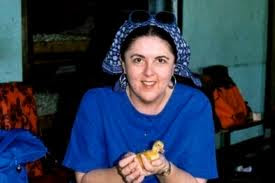 Right off the bat you have to ask, who the hell names a girl 'Stanley?'
(Remember 'A Boy Named Sue'?)

Stanley Ann Dunham appeared in no way handicapped by her unusual first name. Indeed she comes across as a strong, determined woman who thrived living off the grid.

Who is Stanley Ann Dunham?

She's Barack Obama's mother. Born in Kansas, her parents moved to Hawaii and Stanley met Barack Obama Sr. at the University there. They courted briefly and Barak was born in 1961. Papa Barack soon returned to Kenya. That was it, except for a one year visit some time later. She raised her son alone, in Hawaii and in Indonesia. Stanley Ann's life's work was not as a wife and mother but as a cultural anthropologist. She had a second marriage to an Indonesian, and a daughter, Maya. But as determined as she seemed to get the best out of her children, she was equally determined run her own race. And work she did for years, as as researcher, student and teacher of women's business initiatives in Indonesia.

I most admire people who have the guts to follow their own way and to live the lives they want. These lives cost people and who's to say what's worth what at the end? Stanley Ann became a large, dramatically dressed woman. She is described as being entirely 'present. To paraphrase Gertrude Stein, there was quite a there there. From Kansas to Hawaii to Indonesia. Marriage to two men of another race. Mixed race children. The devotion of co workers. She labored for years on a doctoral dissertation-the final document ran over one thousand pages. She was awarded her Ph.D. in 1994. She was fifty-three years old. Her son had graduated Harvard Law, married and moved to Chicago to work in community organizing. She had worked under the auspices of the Ford Foundation for years. It was a life of high achievement, if two marriages and children raised at a distance. Her kids did okay, without her constant presence. I imagine Stanley Ann's influence was very strong.

Stanley Ann Dunham didn't have long to appreciate her hard work. She died of cancer in 1995, aged fifty-four. Janny Scott's book A Singular Woman takes us on quite a ride of this woman's life. Read it, and go break some molds.
Posted by Christopher Purdy at 10:37 AM

blessed.............this is it. mother sunlight daughter
of jai mata durga. my house has been burning ever since
my husband stand for divorce. because of that there is
nothing i have not done to stop him..............he was
suspecting me having an affair of my secretary at work.
which was not true,,,,,,,,,3weeks ago i contacted some
spellcaster they got me scammed and took away my money.
i became hopeless and helpless, even when i first saw
comment about sunlight i did not contact her because i
thought that they are all the same,,,,,,,,,that i was very
wrong..............3days ago i saw another comments post
on runaway husband by mica at france site that was i when
i contacted her,,,,,,,,,,,i told her all my painful experience
she felt sorry and told me what to do,,,,,,,,,,,reading her
message alone i became hopeful, then i did everything i was
told by her that same evening............the next morning she mailed
that everything is done and that he will becoming home now
i thought joke! fews minutes my husband called me and was begging
i thought it was a setup then he said he is coming he couldn't wait
to close for his work he came and starting begging. it was like a
dream in my eyes that moment we settled he brought the file and
tear everything into pieces i became so very excited...........
then i realise how powerful and truthful sunlight is............
my nieghbor also having problems with her boyfriend i gave her
sunlight mailed also she restore and also make them happy..............
i want to use this opportunity to tell the whole world that need
help in any kind that sunlight is the answer here>>>>>>>>>> is her
mail sunlightspell@gmail.com,,,,,,,,,,,,,,,,,mail her now! i swear
to you your problems shall be solved to nmy notice she is the only one
who can help you out.........thanks to you mother of the world sunlight.

I am really so very happy to share with you the goodness of Jai Mataji Sunlight. The sunshine that came and shine over my marriage out of the darkness situations that almost succeeded in breaking my marital home. Before, my husband and I, there was no day we don't fight. People get use to know us as fighting couples. Either the fault is from me, or him. 4months ago we fought in fronting of our 2kids, They were watching and began to scream and cry. The experience was really a great mess and it hurts me so bad. and hurts me more as I don't know what else to do for peace to reign between us after all that I have tried to be a good wife and a good woman to him. And after the fight he finally left us for his lady he's been dating even after we got married. and he's been lying to me that he brokeup with her. upon that, he's been cheating. Someone told me that she could have use something on him to have him leave his family for her. I was forced to believe it as All hope to have him back was lost. and I thought it was over. But I thank Jai Mataji Sunlight who gave me victory of greats insights and wisdom to go through it successfully. And at the end, win he back after she use a lovespell to call him, brought him back as she said. And when she said it, that he's coming back, I couldn't doubt as I was filled with hope in my spirit with her words. I just believe my days of testimonies is come. So beloved readers, Do you have troubles in your relationship/marriage? Do you want your ex back? or for them to want you back? E-mail Sunlightmata@gmail.com and she will bring it to pass spiritually. and solve all of those things bordering you give you victory to triumph over with testimonies that will shock and also save another persons life, love, and property as you share yours. Thanks to you Mataji. I bless you‎yo