Did you have the lunchbox? 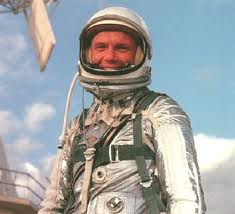 The final launch of the space shuttle had me thinking.
John Glenn lives here in Columbus. He turns ninety next week.
I've seen him a few times, had a few words and did a brief interview with him a few years back, at the Symphony!

The girls didn't have John Glenn lunchboxes.
The girls had Patty Duke lunchboxes
The 'Patty Duke Show' was all the rage on TV.
Several years ago I interviewed Patty Duke on the phone about mental health issues.
She was smart, funny and candid.

You can find the interview at www.wosu.org/interviews

I asked Patty Duke if she had any of her own lunch boxes.
She laughed a lot and said, no-she didn't even know there WERE Patty Duke lunchboxes.

There were, I'm here to tell ya.

So here I am in my dotage and I have interviewed not one but TWO people who had their own lunch boxes.

Take THAT, Spider man!!
Posted by Christopher Purdy at 2:55 PM