Now it gets intense. The challenge is to say something new about Rigoletto and Trovatore. The hits just keep on coming. 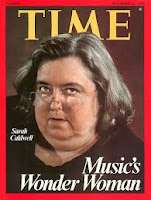 But  Stiffelio is not well known. There's a story to be told:

If you write an opera called Stiffelio,  you'd better be sure it's a good opera.
Giuseppe Verdi wrote a three act tragedy based on the play Stiffelius back in 1850. The story is  the tale of a Protestant pastor who forgives his wife her adultery. There is a very effective closing scene, as Stiffelio preaches the gospel of the woman taken in adultery and proclaims that Christ pardoned her. "Perdonate! Perdonate!" he cries as his wife makes her way toward him down the church aisle.  Handled right,  this is a simple and moving scene.


Stiffelio has been called Verdi's forgotten opera. Until very recently it was  never performed. The 1850 premiere was ruined by the Austrian censors active in Trieste. They demanded so many changes (a minister with a cheating wife, indeed!) that Verdi lost interest and moved on.

Such was Sarah's creativity that she attracted big name singers. Stiffelio was to star the Canadian tenor Jon Vickers. He was still at the height of his powers in 1976. Soprano Anna Moffo would sing Lina. In 1976 she remained the most beautiful and glamorous figure in opera. She had lost her voice at least five years earlier, due to over work and poor training. Stiffelio was meant to be her big comeback.

Jon Vickers never came to Boston. He sent word from his estate in the Bahamas that having studied the score he was convinced the part was too difficult.  No Vickers, no opera. NOBODY sang this opera in 1976. Moffo arrived and everybody else began  to rehearse without the title character. She was on every talk show and this production had enormous pre-publicity.


Long story short. Glamorous and diva like in public, Anna Moffo was warm and kind and professional in rehearsal. It was clear to all of us she was still in vocal difficulty. Remember there was no leading man. Eventually, Sarah forced the role on a young tenor and he valiantly went on. He did himself nor the audience any favors, poor guy. Miss Moffo sang one performance. Her voice quit completely mid way of performance 2. A chorister sang from the wings. Moffo went home to Fifth Avenue and RCA, and Stiffelio limped on the understudies. 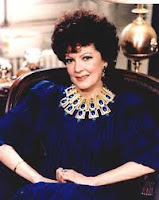 With all of that, it was clear this was a wonderful opera. It's hard to cast. Still unfamiliar, it demands accomplished singers-and they are expensive and you can't bounce their cheeks as Sarah did to the rest of us. Nevertheless it was a good-looking, well costumed production. The media who came for Moffo stayed for Verdi. Bad luck with casting also plagued Verdi himself but in 1976 it was okay for a pastor to have  cheating wife onstage.

The Opera Co. of Boston closed its doors in 1991. Stiffelio arrived at the Metropolitan in 1993. I remember being annoyed that all the press coverage ignored the 1976 Boston production. Phooey. We got there first.

The censorship that crippled the inital run of Stiffelio wreaked havoc with Rigoletto. Victor Hugo was anathema to conservatives. Regicide on stage? Impossible. If the King (Duke of Mantua) has to live he'd better have terrific tunes:


Rigoletto endears itself to the public for the tenor's tunes. The scenes with Gilda and her father are gorgeous and heartbreaking. And the jester himself is a glorious acting role. And what a sing!

Verdi knew what he had. He didn't let a note of this score out of his sight until after the first perforamnce. He eknew every organ grinder in Venice would take up thersr melodies. Where ios there such a balance of tunes and true drama. The beautiful father-daughter dynamic is simple. That it is memorable here is due to Verdi's passion.


Get in there and fight! Get in there and sing! The Marx brothers made fun of Il trovatore and do many others. It is a stand up and sing (or get in there and fight) opera. You need superlative voices. If the singers aren't well matched the balance can annihilate those lest....sonorous. In Trovatore,  the forward momentum Verdi first demonstrated in Nabucco is perfected. This is a swift moving show. One of the gems for me is the offstage nun's chorus in Act 2 sc. 2. The set up toward the battle between Manrico and di Luna and Leonora's rescue ("Donna, mi segui!") is thrilling.
Azucena becomes the pivotal character. A woman who murdered a child and becomes a craezd, pathetic figure has the most dramatic music.


The monks chanting the Miserere, Manrico sings from his prison and Leonora, hearing all this...di te scordarmi!

Posted by Christopher Purdy at 3:01 PM

Are you tired of searching for bitcoin faucets?
Double your claimed satoshis with this amazing BTC FAUCET ROTATOR.