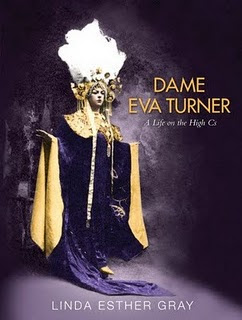 When was the last time one great soprano published a biography of another great soprano? I wish Mary Garden had written about Melba ("I never saw such a fat Mimi in my life") or Lili Lehmann about Emma Calve ("You've improved a great deal.")

Soprano Linda Esther Gray was a leading British soprano from the mid 70s to the mid 80s. She sang internationally, the big girl Wagner and Verdi roles, and she recorded Isolde with Reginald Goodall. So far, so good. Linda's career ended prematurely due to illness-and now she's an a fine teacher and writer Linda has just published the biography of her teacher, Dame Eva Turner (1892-1990).

Eva Turner was the first British born singer-if you exclude the Australians-to have an enormous international career. She had humble beginnings, and spent years touring the U.K. in road shows of everything from La boheme to Tannhauser. She was admired in Great Britain, but in Italy she was loved. For years she sang in Milan, Rome, Naples, Lugano, Brescia-you name it-she was Aida, Fidelio, Sieglinde, Amelia, etc. Her appearances in the States were limited to a few years with the Chicago Opera in the early 1930s.

Turner made a sensation with Puccini's Turandot-no question that with her huge, gleaming voice she owned the role. She sang it for twenty years, and ended her operatic career with Turandot in 1948.

But there's a lot more. The venerable, then downright elderly Turner became a national icon-with clipped, beautifully precise spoken English (rrrrround tones, dear). She was a favorite on radio and TV, was a a famous teacher; a steely combination of Miss Marple and Puccini's Chinese Princess. She lived to be 98-. Her private life she kept private. She never married. Early on she had a working relationship with a musician called Richard Broad (nicknamed 'Plum'-how English) but his tastes did not run to women. Dame Eva lived for over 40 years with a full time secretary companion named Anne Ridyard. Linda Gray makes the case-respectfully- for the two ladies being intimate and why not? They were inseparable until Miss Ridyard became seriously ill in the early 1990s.

Eva Turner: A Life on the High Cs is no prima donna bio, thank God. It's the story of a greatly talented artist who was feisty, outspoken and under appreciated. Eva lived nearly a century-and those years are placed in context of worldwide events-not just in music-in Linda Esther Gray's lavish book. It's complete with copious photos, and the sound of Dame Eva's own voice, both in the text and in an accompanying CD. Don't miss this.

Posted by Christopher Purdy at 11:22 AM