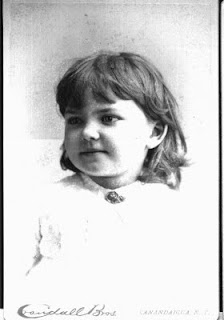 I grew up with my mother's family and I loved her parents dearly.
I never met my father's parents. They died before I was born.
He never spoke of his childhood; it was as if there was a horrible secret.
I'm told by cousins that their mothers (my father had six older sisters) never said much either.

My cousin Deborah has become the family historian and every so often she shares a new discovery. Today its this picture of my father's mother, Florence Leora Curtis -taken around 1887. She died in 1947. My father adored his mother, I know that much (from letters). Florence had her first child at 16. The baby was taken from her and raised by her mother-in-law, the legendary (to us) Grandma Smith.

Five more daughters followed and even Grandma Smith probably gave up.
My father was last in 1919-the only boy.

I only have one photo of Florence taken toward the end of her life, sitting on a stoop in Ithaca New York. Her hands appear to be crippled by arthritis.
It's nice to look at this lovely child and see my own daughter in her eyes.
Posted by Christopher Purdy at 3:12 PM

Join millions who have already discovered easier strategies for investing in Ripple.

Learn from profitable eToro traders or copy their positions automatically!