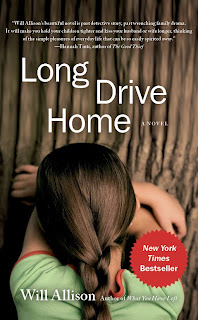 Will Allison is a product of the Creative Writing Program at The Ohio State University. I enjoyed interviewing him a few years back when his first novel, What You Have Left was published. He integrated beautifully a multi generational tale surrounded by racing cars-a NASCAR type fantasy where you were led to care deeply about the characters. It was a very auspicious first novel.

Will's Long Drive Home has just been published. The premise is rather simple: a joy riding teenager with a few drinks in him careens around a residential neighborhood in his mom's Jag-music blaring, oblivious to safety-his own or anyone else's. He runs Glen Bauer, good guy, husband and father, off the road. Glen has finally had enough and deliberately swerves-the kid slams into a tree and is pronounced at the scene. End of story.

No it isn't. It's the-tragic-beginning. Glen is at first totally exonerated. Only he knows that the accident was partly his fault. His seven year old daughter Sara, riding in the backseat-also knows the truth.

Slowly, inexorably , Glen's world starts to disintegrate. He is apologized to by the dead boy's mother. A local detective isn't satisfied and continues an investigation-he knows the truth. Glen's wife Liz insists on a legal separation to protect the family assets in the event of a law suit. It comes out--well--it comes out at a terrible cost.

This is a short book-yet I hated to reach the end. Allison develops a momentum with great subtlety (I know that can be a contradiction) but the reader is caught up in Glen's stomach churning guilt and crumbling existence. All in 200-which I would up rationing myself.
Will Allison is loaded with skill and technique but you notice only the story-and instead of a true catharsis you are satisfied being left with questions.

Posted by Christopher Purdy at 10:00 AM