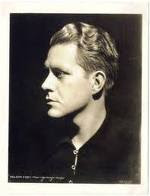 To Whom It May Concern:

I have just had the pleasure of listening to an interview that Christopher Purdy did with Kaye Ballard (www.wosu.org/interviews). I am co-authoring a biography of the late Nelson Eddy. Based on information Mr. Purdy imparted during the interview I would like to contact Mr. Purdy to ask some questions about about information he may have, or may have been told during other interviews about Mr. Eddy

Thank you for your recent e mail concerning my 2007 interview with Kaye Ballard. I don't remember talking about Nelson Eddy with Ms. Ballard-perhaps we did, I haven't heard the interview in a while. I did enjoy Ms. Ballard enormously!

Concerning Nelson Eddy, here's a bit form my blog-a review of Mr. Eddy's concert in Boston's Symphony Hall in April of 1940. The writer is Edward Downes (1911-2001) who at the time was music critic of the Boston Evening Transcript. Edward was the son of NY Times chief critic Olin Downes (1886-1955). I got to know Edward through the Metropolitan Opera broadcast intermsisions when he was the host of the popular weekly 'Texaco Opera Quiz'. I was a panelist for a number of years. Edward, in fact was the subject of my DMA thesis here at Ohio State.

Nelson Eddy, famous all American baritone of the stage, screen and ether waves, gave a recital last night in Symphony Hall which began with Albert Hay Lamotte's setting of Shelly's "Ode to a Skylark" and ended with "The Lord's Prayer", set to music by the same intrepid composer. The program informed us "Of all vocal compositions, Lamotte's setting of The Lord's Prayer is requested most often, a significant indication of the reverence of a people who know how to turn to God." This last confused us considerably. Does it mean the real way to turn to God is to write a fan letter to Nelson Eddy asking him to sing "The Lord's Prayer"? Or does it mean that the number of requests for this kind of vocal composition is a kind of barometer of the devoutness of the American public?

I'm afraid this review is not very flattering. A man who performed Wozzeck and sang in the movies proved his chops!

Good luck on your book, and thank you for contacting me.

Thank you for my inquiry. It is much appreciated.

Just to clarify--you didn't mention Nelson Eddy during your interview with Kaye Ballard. The item that caught my interest was when you made the comment that you "teach opera" and how unaware students are when you play "old stuff" for them. Based on that comment, I was hoping you might have conducted an interview with someone at some time when Nelson was discussed. Barring that, I wanted to ask your assessment of Nelson's voice and talent and possibly ask for your comment on how he, too has been relegated to obscurity.

While conducting research and interviews, I have had the good luck to be able to talk with Lillian Murphy and her husband Earl William Sauvain. I wonder if you have any comments or thoughts about either of these individuals or their talents.

Thank you for the link to your blog. I have read the review of Nelson's concert written by Edward Downes. Although you are correct it is "not very flattering", it seems Mr. Downes went to that concert for the sole purpose of finding something negative to write about. I find it humorous that the only thing he could find was information written in the program. His review never addressed the quality of the concert or Nelson's performance. It would appear he couldn't find anything negative to say about hem, so he simply didn't comment on them but chose to make nasty little innuendoes implying Nelson must have thought of himself as God. Mr. Downes was not being fair to anyone with this review-including his readers.

Edward Downes's papers are at Boston University. I went through them after his death. The only snarky mail I found from his days as a music critic concerned the Nelson Eddy review. There were a few notes, well preserved for sixty years, objecting to Edward's attitude toward a concert that was probably sold to the walls and well enjoyed. In person Edward was a bit of an aesthete with high standards. Still, his tone is surprising. Nelson Eddy, as you know better than me, had a very distinguished career in opera before he went to Hollywood. He studied with David Bispham, the first American born baritone to have an international carer in opera. Eddy not only did the bread and butter operas, but sang leads in the American premieres of Ariadne auf Naxos, Wozzeck, and Maria Egiziaca. This was no dilettante.

One more Edward Downes story. He lived most of his life in New York's Dakota apartments. Forty years ago he was on the board, and was asked to interview prospective new tenants, a couple who were musicians. They came for tea, barefooted and needing a bath. But he liked them and they were allowed to buy into the building. He liked John Lennon and Yoko Ono--this was in 1969, immediately post Beatles, and he had no clue who they were. He died at 90 in the apt. upstairs from Yoko Ono, who today owns most of the building. (To his credit, Edward always enjoyed telling this story on himself!)

You can't make this stuff up.

CP
Posted by Christopher Purdy at 10:18 AM