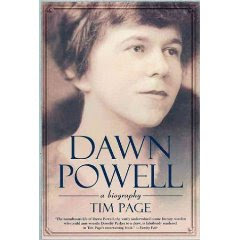 I suspect most of us would never had heard of Dawn Powell without the efforts of her biographer, Tim Page, who not only wrote a scrupulous biography of this heretofore neglected writer, but also published her diaries and volumes of her letters. Dawn Powell was a small town girl from Ohio who made good in New York around World War I. She remained a devoted New Yorker for the rest of her life (1896-1965). Her sixteen novels divide evenly between those set in rural Ohio, and those set in Manhattan. The locations may vary, but Powell's biting wit, humor and unapologetic style remain in the forefront. I warn you, Dawn Powell's writing is addictive. Don't believe me?

If I have ugly babies I am going to kill them. Unless they happen to have a rich father. Then I might let them live a few years to see just what sort of numb skulls they develop into...Beauty is after all the only thing in the world that matters-not mental or spiritual beauty or any of that lying rot, but splendid physical beauty-healthy or unhealthy beauty so long as it is beauty.

Well now. That throws down the gauntlet, doesn't it? Here are some excerpts from her diary:

I am lost without a novel. Those plays confuse me with their hysterical bursts into my life. A novel is like a gland pill--it nips of the cream of my hysterics and gets them running on track in a book where they belong instead of rioting all over my person.

Most important thing for a novelist is curiosity and how curious that so many of them lack it. They seem self absorbed, family absorbed, success absorbed, but the new social climbing writer professes indifference to the people across the aisle, the noise from the next apartment, as if a gentleman does not concern himself with things not his business.

As for New York City, it's the only place where people with nothing behind them but their wits can be and do anything. A young man, particularly with a tuxedo and decent manners, can go anyplace, be welcomed in the ritziest circles and even fought over by debutantes. All he needs to do is act wise...men are too scarce for girls to care whether they were brought up anywhere. The chief difference between New York and everyplace else in the world is that you brag of your early struggles-how you worked on the section or delivered ice and your folks were mountain whites or blacks-and everybody brought up at Harvard or Vassar or in convents abroad is very envious and hates their folks for always coddling them....

From THE BRIDE'S HOUSE published 1929

Buggies and wagons lined the streets of the self satisfied little town, flew flags, bands played parading down the street, Civil war veterans marched and a group of youngsters bore a Loyal Temperance Legion banner and sang, "Saloons, saloons, saloons must go!" But on the contrary saloons had sprung up overnight to meet the country's annual thirst. A fragrant alcoholic haze hung over the town, and tented the entire fairgrounds. Streets were giddy with laughter and the shrill voices and megaphoned speeches of visiting politicians. There were clusters of starched white and flying ribbons here and there, groups of rosy farm girls giggling and ogling each passing man. By nighttime the groups, with good luck, would be scattered, each girl giggling with an awkward young man in some tree shaded buggy behind the fair grounds, hysterically sipping from a jug of corn whiskey and abandoning herself to private yearnings. The wretched little frame hotels, supported comfortably all year by a half a dozen traveling salesmen, now bulged with guests and window shades were drawn night and day, boasting of the iniquity of their bedrooms. Carnival gods rode over the city and sprinkled the orthodox with their confetti.

This was a time when the artists,the intellectuals, sat in cafes and in country homes and accused each other over their brandies or their California vintages of traitorous tendencies. This was a time for them to band together in mutual antagonism, a time to bury the professional hatchet, if possible in each other, a time to stare at their flower arrangements, children bathing, and privately to weep, "What good is it? Who cares now?" The poet, disgusted with the flight of skylarks in perfect sonnet form, declaimed the power of song against brutality and raised hollow voice in feeble reproof. This was no time for beauty, for love, or private future; this was the time for ideals and quick profits on them before the world turned to reality and the drabber opportunities. What good for a new soprano to sing 'Vissi d'arte, vissi d'amore?' What good for eager young students to make their bows? There was no future. Everyone waited, marked time, waited. For what? On Fifth Avenue and fifty-seventh hundreds waited for a man in a hotel window ledge to jump' hundreds waited with craning necks and thirsty faces as if this single person's final gesture would solve the riddle of the world. Civilization stood on a ledge, and in the tension of waiting it was a relief to have one little man jump.
Posted by Christopher Purdy at 1:23 PM