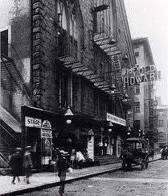 I know very little about the writer Sam Savage, author of two terrific novels. I read them in reverse order. The second, "The Cry of the Sloth" was one of my favorites for 2009. I just read his first novel, "Firmin", the autobiography of a rat who lived in a bookstore in Scollay Square. Where? Scollay Square was a Boston neighborhood that was bulldozed, completely wiped out, in the late 1950s to make way for the ugly and barren Government Center. Scollay Square was home to pimps, hookers, thieves, strippers, sailors, crooks and the like. As such it was the bustling heart of the city, the alternative to sometimes chilly Friday afternoons in Symphony Hall. (A digression: My mother's first cousin, Mary Elizabeth Corbett, became the voluptuous Marie Cord, headliner at the majestic and infamous Old Howard, complete with swinging tassels. Go ahead, laugh. Marie died young on Christmas Day 1963, but to this day her elderly siblings live in a fine house she bought and paid for). Firmin, our rat friend, is not only born in a bookstore-in a nest made of shredded bits of Moby Dick, but he becomes a voracious reader himself. He eats up great books, often literally. He falls in love with Ginger Rogers, whose films he sees regularly at the Rialto Theater-which becomes a porno house at the stroke of each midnight. Firmin also falls in love with Norman, proprietor of the bookshop, but Norman resorts to rat poison and that's the end of THAT Romance. Ultimately Firmin is adopted by the down at heel writer and philosopher Jerry Magoon, who likes rats. Alas, the street life catches up with our Jerry and finishes him off. Leaving Firmin in a cleaned up neighborhood devoid of interest and humanity-the very qualities this novel has in abundance!

All I know about Sam Savage is what I read in his brief author bio: advanced degrees from Yale, born 1940 in South Carolina, now living in Madison Wisconsin. He's a complete original. Read "Firmin" and "The Cry of the Sloth"-put them on your Best Book list of 2010. Thanks Sam, whoever you are!

And you don't have to believe stories to love them. I love all stories. I love the progression of beginning, middle and end. I love the slow accumulation of meaning, the misty landscapes of the imagination, the mazy walks, the wooded sleeps, the reflecting pools, the tragic twists and comic stumbles. The only literature I cannot abide is rat literature. Including mouse literature. I despise good natured old Ratty in The Wind in the Willows. I piss down the throats of Mickey Mouse and Stuart Little. Affable, shuffling, cute they stick in my craw like fish bones.
--Sam Savage, "Firmin" pp.37-38 Coffee House Press
Posted by Christopher Purdy at 9:34 AM