Steven Mackey born in 1956,  is Chair of the Department of Music at Princeton University. I'm hoping he will join me for this weekend's pre -concert talks, so we can all meet him and hear about Four Iconoclastic Episodes. I do know that this work, written in 2009 for the Irish Chamber  Orchestra and the Academy of St. Martin in the Fields, is a concerto for orchestra, violin and electric guitar. The electric guitar is Mr. Mackey 's primary instrument. He'll be on stage with the Columbus Symphony and violinist Anthony Marwood.

"I am fascinated by the sensation of movement in music. Journey metaphors are often aptly applied to my music, and I'm interested not only in the illusion of travel and arriving, but in delineating topographies and viscosities of the medium traveled through. Related...is a desire for transformation, for a sense that something-the material, me, the listener is changed by the journey. As a result, my music tends to be a one way trip"

Mr. Mackey is a composer worth knowing better: stevenmackey.com 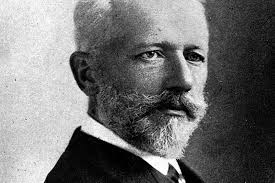 About that term, Pathetique. The composer agreed to it. A catchy name is good for sales. He withdrew his consent the next day, but the plates had already been prepared, so the score was given to the world as the Pathetic symphony. Tchaikovsky understood this term as "passionate" or "emotional", certainly not as pathetic as we use that word today. Tragic some of the overtones may be, but pathetic? Pitiful, pitiable, piteous, moving (maybe) distressing"...not on your bloody life.

And why would Tchaikovsky commit suicide? We know he died of cholera after drinking a class of unboiled water in a St. Petersburg restaurant.  A Russian musicologist called Alexandra Orlova suggested in the late 1970s that Tchaikovsky had a liaison with a young nobleman who was a member of the Tsar's private guard. When this became known Tchaikovsky was told to kill himself to avoid public scandal, and did  so. Michael Steinberg doesn't buy it and that's good enough for me.
(I'm indebted to Steinberg's The Symphony, pp. 635-641)

This four movement symphony begins with a hushed figure for solo bassoon over tremolo strings. at Classical 101 we have to throw the pots up to the max) Then comes the first big tune, and no big tune is ever wasted:

The second theme of the first movement contains a four note figure rooted in the Orthodox Requiem, E,G, F#, A which has come to be called his 'crucifixion' theme, thus feeding the rumors.

There's a  flowing but off kilter waltz in 5/4 instead of 3/4 and the third movement is the famous march. At the end pf which people applaud vociferously and reach for heir coats. Except this is not the finale.  Keep your coat off. The finale is adagio lamentoso, not a big finish, but a dying away.
Don't leave early. This, after the brazen third movement, is not a fade down but a loving fade-out:


And no, Tchaikovsky did not consider this Symphony to be his final work. At his death fresh sketches were found for a third piano concerto. He fully expected to go on working and living.

Posted by Christopher Purdy at 10:07 AM