About Mrs. Roosevelt: An Interview with Blanche Wiesen Cook 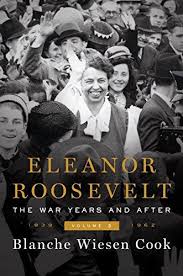 Ms. Cook is distinguished professor of history at John Jay College and Graduate Center, City University of New York. In addition to her biography of Eleanor Roosevelt, her other books include The Declassified Eisenhower and Crystal Eastman on Women and Revolution.

Eleanor Roosevelt volume I was a winner of the Los Angeles Times Book Prize, and both volumes
were New York Times bestsellers.

I spoke with Ms. Cook yesterday from her publisher's office.

CP: Should I call you professor Cook or Doctor Cook, how would you like me to address you?
BC: Call me Blanche
CP: That makes it easy. Could you tell me what your initial attraction was to Mrs. Roosevelt?

BC: Joe Lash said Eleanor Roosevelt is infinite. She never stopped growing and changing. Her vision of the needs of the people was prescient, and enduring.

For me I was most moved by the fact that she identified with the people in want, in need, in trouble. People like her own family.

CP: I was very surprised that during her lifetime, during her work she was very often unpopular and reviled. Here was someone who was trying to get health care and housing for everyone and people called her a socialist. A lot of people did not like her. That's hard for me to grasp.


BC: J. Edgar Hoover hated her. He called her the old cow, and the old hen. He monitored her phone. He bugged her hotel rooms. He always called her a communist because she was against racism. The largest proportion of her file, which is over 3000 pages, is everything she said against lynching, against degradation.

I think we need to pause to realize that all integrationists in the 1940s and 50s were called Communists. Everybody who wanted civil rights was called a communist. Eleanor Roosevelt's commitment to ending segregation, and for building a civil rights community was particularly reviled. Also, Eleanor Roosevelt would say, "Men hate women with power". And Hoover, in particular, hated Eleanor Roosevelt. And her women allies who campaigned for more democracy and decency for everybody.

CP: She wrote a newspaper column for may years called My Day. It began as I understand it as kind of a diary. But eventually it became an outlet for her. How important was that daily column?

BC: It was very important. It started out by her writing these letters to great friend Lorena Hickok as to how she spent her day. I think this became her therapy. She really needed to write and express herself, and Hick said, Why are you sending me all these letters? The whole world wants to know how you spend your day. From 1936 to the end oh her life, she wrote a daily column. It was widely syndicated, in newspapers around the country. And then after 1946 around the world. People read her column in which she talked about the issues of the day, as well as her own day. It became very popular and influential, and then she became the first lady of radio. She had a radio program. Spoke all over the country and then all over the world. She had really a very important voice in which she called for civil rights and human rights.

From the 1930s on she does something called trouping for democracy. She really believed we needed to build movement for social change.  One politician and allies are not going to do it. We need movement. And that was her goal.

Marriage of Eleanor and FDR

CP: The marriage of the President and Mrs. Roosevelt was troubled. FDR had an affair with Lucy Mercer. Do you think if there had been no Lucy Mercer and everything had been copacetic, she would have had the same kind of career?

BC:  I think she probably she would not have had the same kind of career. She would have been much more the handmaiden to FDR. But the fact that they had two separate courts, she had a lot of freedom. FDR trusted her to go around the country and be his eyes and ears. He really had great respect for her. He said, people are willing to tell anything to my wife.. So he really trusted her to go around and get information, and bring it back to him, and support his programs, She always believed they shared an ultimate vision. Even when she didn't approve of his priorities or compromises . She always believed they shared an ultimate vision for what was good and right . They were really partners and allies.  But I think the fact that they led two separate lives gave her a lot of freedom  to do what she wanted to do.

CP: My mother loved Eleanor Roosevelt. I was a little kid when Mrs. Roosevelt died but I remember my mother sitting in front of the TV being upset, and talking about Mr.s Roosevelt. What is Mrs. Roosevelt's legacy today?

Her legacy is, okay, now we're more organized, now we understand, that we need to build a community of activism to support the things we care about, and the women in leadership we believe will make the country a better place. And restore democracy.

CP: Lastly, I;'m sure everyone is asking you this, what would Eleanor Roosevelt make of the current presidential election?

BC: I think she;d be heartbroken. That we have a man who speaks with such hate. Who is calling for violence. For people who are calling to disrupt the peace of election polling places and is a racist. I think she'd be appalled. And I think she'd fight for what she fought for all her life, which is dignity,  justice, civil rights, and human rights.  FDR said in 1940, We will have the triumph of democracy , or we'll return to the dark ages.

Posted by Christopher Purdy at 9:36 AM