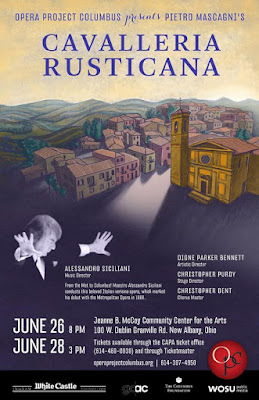 The first Santuzza and Turiddu were soprano Gemma Bellincioni and her husband Roberto Stagno. Both were huge stars in late 19th century Italy. Bellincioni had become Verdi's favorite Violetta in La traviata. Stagno, who died young, was a very handsome tenor with a huge following. Recordings nearly 120 years old do neither justice. Remember they were singing brand new music in a new medium nobody trusted. It was a fluke, a joke. Recording wasn't yet taken seriously.

At the end of last night's rehearsal we were all exhausted. We've had a very intense few days of work. The last two rehearsal were productive, difficulty-for the right reasons-and rewarding as the show visually and aurally takes shape. Our conductor can transform a fine chorus into a world class ensemble in five minutes. He's done it more than once over the past week, whether rehearsing the opening "Gli ranci olezzano sui verdi margibni" or the Easter Hymn.

I don't mind telling you that I love this chorus, and several of its members are becoming increasingly dear to me. Great work and good spirits,in spite...

We've done a lot of work really delineating the Santuzza-Turiddu relationship. I see her as a bit more evil than does our leading lady. I think Santuzza transitions fast as Turiddu leaves and Alfio enters from scorned victim to vengeful spirit. OK not a malevolent harpy, but I think she knows what shes doing to Turiddu when she spills her guts to Alfio. One of the things I love about our Santuzza is the guts with which she sings and inhabits her role. It's good to disagree a bit in a friendly fashion. I learn from this. It's wonderful to have a handsome Turiddu who sings well and who last night began to show some vulnerability and variety in his performance. I believe Santuzza has her share of cruelty and Turiddu his share of conscience.


As I watched our rehearsal last night I saw Cavalleria rusticana begin to take shape as Opera Project Columbus's music drama. We won't have the the physical space for the chorus until we move into the theater next week. By then, when they can move a bit and show themselves tot he public, I'll be help to help flesh out individual characters. Musically the show is already a knock-out.


Our Alfio is making the cuckolded carter a leading role. He asks me, who else sings Alfio. A lot of the 'names' avoided this part. I wonder why? He gets a great entrance, and vengeance seen to curl your tits. Robert Merrill recorded the role and said he hated it. I don't think Sherrill Milnes ever performed Alfio. Lawrence Tibbett and Cornell MacNeil refused the role. It may not be an accident that two great performances of Alfio were done by Italian baritones-Tito Gobbi and Ettore Bastianini. Bastianini was a very handsome man with a huge, beautiful voice. Gobbi was not handsome and his voice was undistinguished. But-there was no greater singing actor in his day. His Scarpia in Tosca was sexy and terrifying. All you need to make anything a leading role is talent.

Posted by Christopher Purdy at 1:21 PM

Stagno and Bellincioni were indeed partners in art and life, but never married (Stagno was already married to another woman by the time he met young Gemma). Their daughter Bianca Stagno Bellincioni had warm things to say about them in her book 'Roberto Stagno e Gemma Bellincioni intimi' and in an interview printed in Lanfranco Rasponi's 'The Last Prima Donnas'. (According to Bianca, Puccini wanted her parents for the prima of MANON LESCAUT, but on the condition that Stagno shave his beard. Considering that every surviving portrait of Stagno shows him con la barba, one can guess what happened to that plan!)

Whether or not they were huge stars is debatable: they were certainly important players in the 'giovane scuola' movement, and like most artists who bring a new sound and look to an established art form, they had their champions and their critics. Controversy.

Bellincioni did create a sort of sensation as Violetta (though conspicuously not in her lone Scala appearance in the role). Verdi admired her theatrical appeal in the part, though he considered Violetta a surefire part regardless of the performer (something to the effect of 'even a nobody could succeed in Traviata'). Neither he nor his close colleague Arrigo Boito were terribly impressed with Bellincioni's singing, and in later correspondence with Boito, Verdi claimed that Bellincioni performed her roles 'with too much emotion'. In fact, if any artist of that time approached 'favorite' status (in Violetta or any other role) with Verdi, it would be that old-school-repertoire/old-school-style artist Adelina Patti!

Stagno was not too young when he passed away: being 20-plus years Bellincioni's senior, he succumbed to kidney and heart problems at the age of 56 (60 according to some sources). He did not survive to leave behind recordings; Gemma's first discs date from six years after his passing. Though no one had any idea of the impact, let alone survival possibility, of these early recordings, the artists (being artists) certainly tried to perform to their personal best given the challenges of medium (primitive technology), location (studio, hotel room, wherever they could record), logistics (crammed into the space and the singer had to be careful not to move too much), and yes performer capacity (singers do have better days than others, and quite a few of these recordings capture singers who were showing noticeable wear-and-tear after so much career activity).

What can be heard in Bellincioni's recordings? A lively imagination… heartfelt phrasing (with yes that old-fashioned 'silent-movie-in-sound' manner)… an ownership of the music that extends to taking an editor's hand to what the composer actually did set (in both her recordings of Santuzza's aria, she never sings the 'o' in 'Voi la sapete, [o] mamma', not to mention her endearingly daffy rendition of Carmen's habanera in italiano)… and a fleetness of vocal response (both in her easy onset of every phrase and in the fleetness and accuracy of her fioritura, heard in the cadenze of 'Ah, fors'è lui' and 'L'altra notte in fondo al mare') that points back to the fact that she was still a 19th-century singer trained in 19th-century requirements. She had started out as a teenager in florid high-tessitura soprano repertoire (PURITANI, SONNAMBULA, LUCIA, LINDA DI CHAMOUNIX, and her frequently-performed yet detested role of Isabelle in ROBERT LE DIABLE) and switched to a more overtly temperamental repertoire which satisfied her interpretatively but demanded (too) much from her vocally, in which she could create fireworks with her tenor partner. Sound familiar?

Whoever you are, thank you for a great POST!