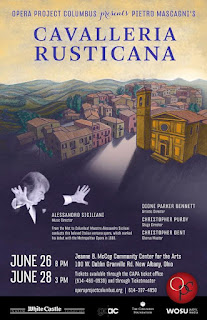 The wide world of opera lived up to its old time reputation for torrents of emotion and hissy fits at last nights rehearsal. Not even a bag of Snickers bars supplied to me by the wonderful choral director prepared us all for Vesuvius and a tantrum rivaling any three year old you'd care to name. There was a walk out, screaming and gnashing of teeth, and apparently relentless phone calls. Even I raised my voice. Yes, I know that's hard to believe.

Once resumed, the rehearsal was doomed by a power failure. Lights out all the way to Weber Rd. In short, nobody rehearsed last night. That's not to say there wasn't a show. But Cavalleria, indeed any opera, has better tunes.

Tonight I've asked for an early half hour top lock in the Turiddu-Santuzza duet. Since its just the two of them on stage it's important to let them flow physically with the music. EXCEPT one can't use hand signals that direct traffic.  I like a ballsy, angry Santuzza with nothing apologetic about her. Even the the "No, no Turiddu" is lovely music and instant pathos, I find myself tiring of her if she seems to whine. It's entirely possible to perform any words and music combo as written and still put on your own 'spin'. For me, Santuzza is a woman very much trying NOT to be a victim. She keeps banging on the door demanding to be admitted.

Likewise Turiddu, who seems to have no guilt vis a vis Santa, is living in hysteria. He is caught in a matriarchy he knows will punish him for putting his cazzo where he will. Turiddu changes the minute Alfio comes on stage. In his last half-hour, he grows up.

Listen to this blistering performance from 1932. Beniamino Gigli and the American soprano Dusolina Gianini:

Many years ago I was doing the poor student tour of Europe. I was in Munich. I tried my luck for tickets to Cavalleria Rusticana at the National Theater. Placido Domingo and Leonie Rysanek. I managed a student ticket and tipped an usher for a better seat. I didn't have time to study the program. I noticed the Mama Lucia, a plump older lady, looking every bit the stereotypical Italian Nonna. She peeled potatoes for most of the opera. And I mean SHE PEELED POTATOES. She listened, completely in character, totally in the moment. You have to be pretty tough to divert attention from Domingo and Rysanek, who were both sensational. But I had to know the name of the comprimaria doing Mama. The voice sounded old. And there it was. Astrid Varnay was one of the world's great singing actresses, Bayreuth's Isolde and Brunnhilde, a fabulous Elketra, now doing character parts in Munich. If her name had been Susie Schmidt I would still remember her performance. I never heard Varnay in her prime. But I sure as hell SAW her.

Posted by Christopher Purdy at 1:34 PM