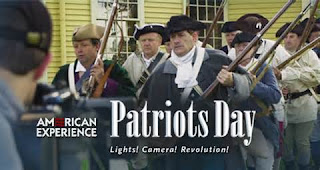 That's Patriot's Day, little known outside New England. It's a state holiday in Massachusetts: no school, no work, parades, pancake breakfasts, battle reenactments and scads of hula hoops and tri-corn hats.
The American Revolution began with the battle of Lexington on April 19, 1775, around 5 a.m. People in Concord MA will tell you the American Revolution began there at Concord Bridge. Yes the battle continued in Concord, but those of us from Lexington have long allowed our neighbors to rave on.


April 19 became a "Monday holiday" years ago. I'll say this for Concord, their celebration has always kept to the actual date. The Boston marathon is run on Patriot's Day. For me the day was magic as well because the Metropolitan Opera always opened their spring tour at the War Memorial Auditorium, close to the finish line. The War Memorial was great for the boat show and bad for the opera but one made do.;

In short, April 19 or the Monday closest to it was a time for celebration. It was a great day. Now look 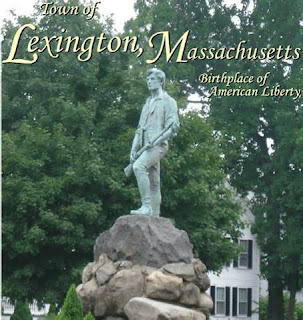 April 19, 1989 rape and beating of the Central Park Jogger
April 19, 1993 David Koesh and the Branch Davidians firebombed in Waco, TX
April 19, 1995 Timothy McVeigh blows up the Murrah Building in Oklahoma City killing nearly 200, many of them children
April 15 (for the 19th) Bombing at the Boston Marathon, killing three including an eight year old child, injuring many others. On e police officer killed later that night.

I don't know what the good burghers of Boston and Lexington are going to do about Patriot's Day in the future. My guess is a rousing fuck you to those who would use this or any day for violence.

But the day is tainted by violence by the sick and deranged toward the innocent . And yes, I know all about the U.S. bombing Baghdad and the horror of Vietnam.

I have a number of unhappy memories of growing up in Lexington-not the town's fault! I have only wonderful memories of Boston. All through Jr. high and high school, Boston to me meant freedom. I often skipped school to crash Sarah Caldwell's rehearsal at the Opera Co. of Boston (theater in the combat zone...yay!) to sit in the Boston Public Library Meeting Room, to eat pizza in a dive on Boylston Street-almost smack in what became the bombing site-and to go to X rated movies since I could pass for 21.

I would get off the Red Line at Charles St., and walk down to the public garden. I loved that walk down Charles Street to this day. That walk was my Freedom Trail. I would walk all over the city, by myself and loved every minute of it. Even if I did nothing else, walking through Boston never disappointed me.

A dear friend , a city, has been wounded. People have been killed and badly hurt. I wish I could be there just to walk around again. Boston is beautiful and for me was filled with opportunity. I lived in the city, I went to B.U. and I had escapades I shudder to remember. And enjoy remembering as well. What a time! What a city! 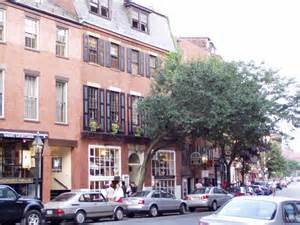