Memories of Opera on Radio pt. 2

Maybe it was a bad idea to sort and organize my collection on opera broadcasts going back seventy years. There's only so much room, and all this Mp3 technology is beyond my advancing years. But  I've filled two large bookcases, pilfered form the store room, and there's more scattered over the floor. It took several weeks, but we are all sorted by composer and then title. OCD rocks!
But it is fun to know just where to find a specific performance and either remember hearing it originally or learning about voices and performance styles from the past.

Here are a few more:

Here are a few more 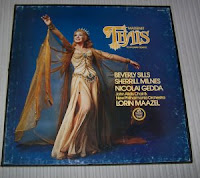 Massenet: Thais, January 28, 1978: Beverly Sills, Sherrill Milnes, Raymond Gibbs, James Morris/Sir John Pritchard  Beverly Sill's years sang at the Metropolitan were in the closing years of her career, with the sparkle and brilliance of her voice diminished. (Why it took so long is another story.) The tone is dry and brittle. Her first act is too obviously hoochy-kootchy, and lacks the sophistication needed to put over the character. Later on she can't fill out the dramatic writing for the randy courtesan who finds God through the help of the monk, Athanel. Sherrill Milnes is macho and vocally impressive. The rage of the character and his later grief and acceptance don't faze Milnes, who in 1978 was THE baritone in opera. The production was not liked much visually-I recall more than one cry of "Vegas!' for its faux oriental glitz. Thais is a good score of the second rank. There's obvious diminished chord and colorful 'wash' in the orchestra. It's more a question of musical show don't tell.Massenet was a master of the stage at the time of Sarah Bernhardt-her histrionics would be ludicrous today. Don't believe me?


Thais has a bizarre history in the States. It was for many years the property of Mary Garden, who learned it from Massenet. Geraldine Farrar created Thais at the Met and claimed to dislike the role. California bombshell soprano Carol Neblett infamously ditched a high note in a performance in Baltimore, shucking off her splendid robes altogether to reveal her own altogether. That made the papers. Anna Moffo destroyed her career with a very highly publicized recording of the opera In 1975 which found her voiceless. as in no voice. The booklet photos looked hot, though.

Unkind wags called these 1978 performances "Thighs", but say what you want about Sills, she sang this role 17 times in New York, having originated it in San Francisco, never,  I'm sure to an unsold seat. Her publicist floated a rumor picked up by all the newscasts-that she would dance naked on the stage. (David Brinkley cringed reading this-go ask your parents.)  The lady cheerfully told the press that she was "flattered anyone would think a fifty year old woman could be appearing naked, anywhere!" You gotta lover her. I saw this on tour in Boston


Menotti The Saint of Bleecker Street from the New York City Opera, with Catherine Malfitano, Enrico diGiuseppe, Diana Soviero, Sandra Walker, Irwin Densen/Cal Stewart Kellogg
This is the soundtrack to a TV broadcast from the New York City Opera in 1978.  I'm just old enough to remember the pre-Vatican II church, and whether its Irish Boston or Little Italy in New York, the ritual of the church and the dogma were pervasive. It was lived.  Menotti reflects this beautifully in this opera. I wish the video of this would be released commercially in toto.  Bits are available on youtube.

I remember watching the live telecast. The cast represented the best of American opera: Malfitano and the underrated Di Giuseppe-and the wonderful Diana Soivero.  And it represents the lamented New York City Opera at its best-as a company.

This mid war broadcast comes to us with Spanish language commentary. With the exception of Pinza and the great Bruno Walter, the cast on paper doesn't look too appealing. Caruso introduced this opera to New York in 1918, with Rosa Ponselle in her first opera performance anywhere. Ponselle continued with the opera with Martinelli, Jose Mardones, Pinza, Danise until 1932. She was retired-sadly-by 193 so Stella Roman shared the role with Milanov. I went to college with one of Mme Roman's grandsons. She is considered another good not great artist. But there was a lot to this lady. She sang in the Italian premier of La donna senz'ombre (Die Frau ohne Schatten) and was acclaimed for her Marschallin in Il cavalier d la rosa. Hers is a beautiful voice that lacks the fatness-the juice throughout the middle register, and its short on top. Never mind. She gets the job done, and a fine job it is. Pinza is great. Jagel has a monochromatic voice but sings like a fine musician. Exciting he is not. He's loud when he's supposed to be loud, etc. Every discussion of Lawrence Tibbett's career goes into tragic mode once past 1939. Either it was overwork that led him to drink or drink that ruined his voice, but his throaty gargling and forced top notes are not those of the great Amercian baritone he had been. Bruno Walter reminds us that Forza is a tight dramatic opera with great music. It's a very passionate performance, the singing not always up to the conductor's level.

I want to pay tribute to Lawrence Tibbett by showing him in full voice, in 1935:

Von Stade owned Cherubino for years and I remember vividly not only her fine singing but her lovable, horny stumbling around as Mozart's randy little page boy. I attended this performance thanks to the Texaco Opera Quiz. I don't remember much about Kathleen Battle in her pre -smack down days, except I'm sure she was vocally ravishing (she was as Pamina and Adina around the same time.) Jose van Dam is a great artist who easily owns any stage. He is not a basso cantante but he points the text to the benefit of non Italian speakers. No, for me the news was the Countess of Elisabeth Soderstrom. She was nearly sixty at this performance. Just the way she held herself told you this was a noble lady. She is vocally understated but intact. Never will I forget the look on her face, all of three seconds, as she heard the Count trying to pick up "Susanna" in Act IV. One for the ages.


I saw my first opera in the War Memorial Auditorium in Boston in 1969. The boat show trade show auditorium would host the circus one week and the Met the next, or was it the other way around? No matter. It was no place for opera but it is what we had. It became home to me (long gone) I attended this Turandot. the draw was tenor Franco Corelli, he of the golden thighs, endless visceral voice and onstage/backstage mania. The voice rings out in this performance as it nearly always did. He attempts a diminuendo on 'o meraviglia' in Act I. The crowd went nuts for him. They always did. It was soprano Edda Moser who wiped up the afternoon. Who knew? She had sung Donna Anna earlier that week. she was a Met Queen of the night, Musetta. no handstands. This Liu is another story. There's a full, rich, luscious voice here. Even with Corelli it was Moser who got the ovation that afternoon. I remember her sincerely overwhelmed the audience response. I was cheering , too.


Elinor Ross's career is being reassessed today. Listening to her broadcasts its true this was a huge, exciting voice. I remember the casing of vibrato all through the tone as off putting. During the intermission of this Turandot a friend said to me, "I've never heard her better". And listening today, its true-she'd be a goddess. Kudos to conductor Otvos for keeping everyone together-mostly-in a bran of an auditorium. (Note to the Emperor Altoum. Sing, don't mince.)

Posted by Christopher Purdy at 2:49 PM