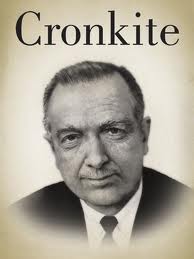 I was born in late 1956. I turned fourteen as the 1960s ended. Like most fourteen year olds, my mind was not on world affairs. While I was aware of the MLK-RFK assassinations, Vietnam, the 1968 democratic convention in Chicago, Kent State, Peace Day and the Manson murders-I was not riveted to any of it.  I do remember clearly seeing all of these events covered on TV-Black and white, rabbit ears-. My father was Archie Bunker before there was an Archie Bunker. His pungent comments to the TV screens would have my mother, Budweiser in hand, yelling, "Shut up Bill, for Christ's sake, you don't know what you're talking about. Look at all those poor goddamn kids being killed. Jesus, Mary and Joseph."

I am no longer missing the 1960s. I'm learning about them anew in Douglas Brinkley's new biography of Walter Cronkite. This book is like overly buttered popcorn..delicious and impossible to put down. The grease and cholesterol are worth it. That's a bad analogy, since this long  book is not a long read. I almost want to ration myself to a few pages a day to make the pleasure of learning the history going on around me in my younger days.

Brinkley gives us the serious, hard working, forthright, no bullshit newsman. He gives us "Uncle Walter"  who was courtly (sexist) with women, loved a good flirtation, more than one drink of an evening and a dirty joke. I've been called cynical now in my mid fifties, but it never occurs o me that Cronkite's glasses- off reaction to the murder of JFK (as a younger person remembers 9/11/...) was anything put spontaneous-a reaction to this stunning, awful news.

"If I've lost Cronkite I've lost America." LBJ was supposed to have said that, or a variation thereof, following Cronkite's excoriation of the Vietnam War.

No, his views weren't universally popular. People equated an anti-war stance with a hatred of our troops. Indeed there were enough morons who DID beat on our people, the ones who came home alive. THAT is what pissed off much of America. We were much more innocent then. The realization that all was not a it seemed or should be with elected officials was new, shocking and news. Would a 'Watergate" so traumatize the country today? Maybe. Remember we don't have Uncle Walter, who was not handsome, nor glib, nor elitist (stupid overused word) to tell us about what was going on and to make us as citizens demand to know more.

I don't believe a Cronkite would be able to function today-when a pretty girl getting a divorce after two months is news. Makes me rather glad I was born in 1956 and not 1996.


Posted by Christopher Purdy at 11:47 AM